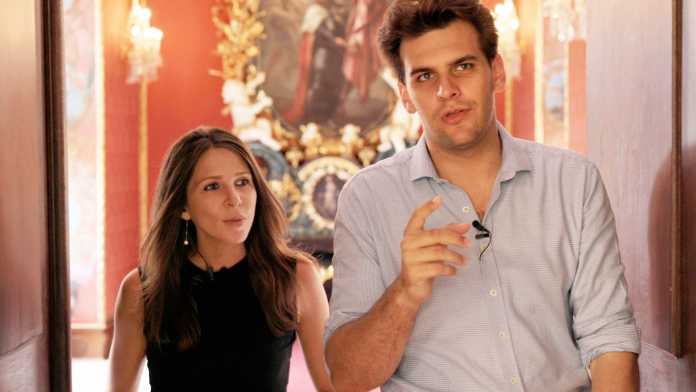 CNBC’s MacKenzie Sigalos and William Rudolf Lobkowicz in the Family Chapel of the Lobkowicz Palace depicting an early 18th-century altarpiece painting of St. Wenceslas, patron saint of the Czech nation.

PRAGUE — It is past midnight on a Friday at the Lobkowicz Palace in the Prague Castle complex. A 27-year-old Czech prince, William Rudolf Lobkowicz, is crawling on the hard stone floor, taking care not to trigger the alarms behind the guardrails that partition the castle’s daytime visitors from the 16th-century portraits hanging on the stone walls.

He’s trying to find an outlet so he can plug a 30-foot extension cord into the wall. The cord powers camera equipment to be used in a live broadcast happening around 1 a.m. which will feature the story of his family on a CNBC primetime show in New York. Lobkowicz will be behind the camera for the shot, but that doesn’t matter to him. He simply wants to share one of the world’s greatest private collections of masterworks with the public.

A young prince in an ancient castle stashed with priceless art sounds like the beginning of a fairytale, but his life is far from a Disney adaptation.

The palace feels more like a crypt. At the height of Bohemian summer, the humidity clings to our skin, and it is pitch black beyond the glow of the stark fluorescent lighting that runs along the high stone ceilings. Each time Lobkowicz comes to a door, he reaches down to a bulky keyring that looks like it belongs to a monk in a monastery and fumbles for the right key to let him through — and there are dozens of doors on each floor. Each door leads us deeper into the dark stone labyrinth, deeper into the past.

He and his family do not live in this or any of their other ancestral castles or palaces. Instead, they live in personal apartments a ten-minute drive away. To stay past 10 P.M. on a Friday night, Lobkowicz has to get special…

Woman returns to run Boston Marathon 50 years after running in...