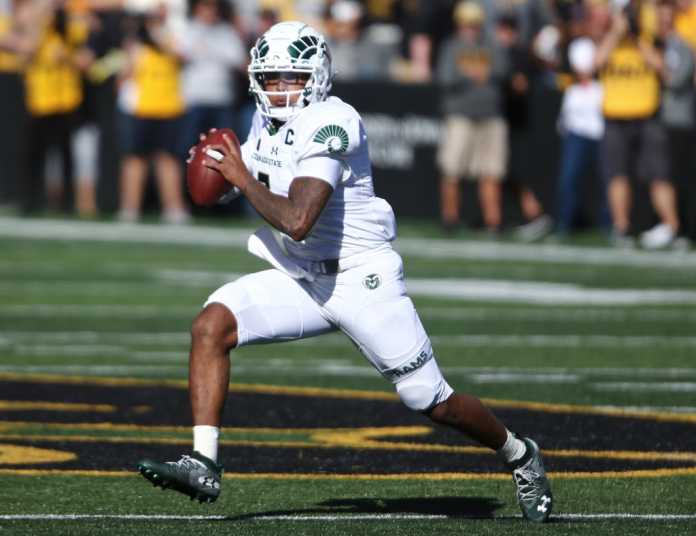 Mixed bag. Will the real Rams please stand up? CSU begins Mountain West play this week and it’s hard to know the true identity of this team. The Rams flopped in season-opening losses to FCS South Dakota State and Vanderbilt. Then CSU upset Toledo on the road and led No. 5 Iowa at halftime (before a narrow 10-point defeat). Give head coach Steve Addazio credit for not allowing early-season letdowns to define this team. But it’s anyone’s guess which direction the Rams go from here.

Stop the run. The key for CSU’s recent success? A suffocating run defense with the statistics to back it up. The Rams limited Toledo’s offense to 0.5 yards per carry (28 for 13). Then CSU’s front seven proved equally dominant at Iowa with the Hawkeyes running 32 times for 54 yards — a meager 1.7 average. If that trend continues, CSU has a real opportunity to make noise in the Mountain West this season. The secondary is often a liability. But there is no questioning the strength of this team is run defense.

QB mystery. CSU’s defense has the challenge of facing an unknown quarterback against San Jose State. Spartans’ senior starter Nick Starkel — after leading SJSU to a 7-1 record last season — went down with a non-throwing arm injury in Week 4 at Western Michigan. His replacement, junior Nick Nash, made his first college last Saturday and led the Spartans to a 37-31 victory over New Mexico State. SJSU head coach Brent Brennan declines to share injury news with the media. CSU must prepare for either QB.

Home advantage. The first-half atmosphere at Canvas Stadium in two homes games this season was phenomenal (especially the student section) with 32,327 in attendance vs. SDSU and another 27,233 for Vanderbilt. But that noise was lost in the second half of each game with the Rams falling behind as home favorites. CSU did well to stave off fan apathy with consecutive strong showings on the road. But maintaining a solid crowd in Fort Collins is difficult without a consistent winner. Will the Rams faithful show up Saturday?

CSU secondary vs. SJSU wide receivers. The Spartans have nine receiving touchdowns split between seven players. That variety of production is certain to test a CSU defense that’s given up 239 passing yards per game and six TDs through the air. A strong pass rush will help out the secondary.

CSU QB Todd Centeio vs. SJSU defense. Centeio has done well protecting the football with just one interception this season. But he needs to start stretching the field vertically. The healthy return of injured wide receiver Dante Wright will help. But it all hinges on Centeio’s improvement.

Who needs a high-powered offense when you limit the other team to a field goal? The Rams will win with defense this season (even if it’s boring to watch on TV).

The Rams have averaged 41 points in each of their last three meetings with the Spartans dating back to 2014. This offense might be lucky to put up 41 points, combined, between now and Halloween.

Given an extra week to prepare, and directly after the Rams gave Iowa all it could handle in Iowa City, Daz’s Dudes will be ready.

A Colorado hospital charged $722.50 to push medicine through an IV....