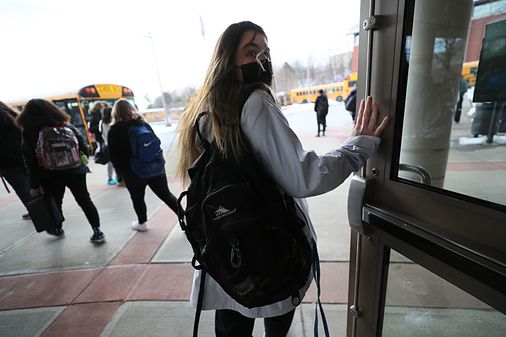 “If you’ve been told for two years that not wearing a mask could hurt someone you love, and now you’re being told that it’s OK, that’s a big thing to wrap your head around,” said Dr. Ryan Madigan, a pediatric clinical psychologist and founder of the Boston Child Study Center, with offices in Boston, Natick and Worcester. “It’s important to take time to talk through children’s worries with them, to really listen, and to view it through their developmental lens.”

Although proponents of mask-free schools often cite a recent crisis in children’s mental health as a reason to end mandates and return to normalcy, the removal of masks brings its own complicated reckoning for some children, as well as the need for patient navigation by adults, at a time when many are feeling out of patience, said some experts.

In more than 50 Massachusetts school districts, including Barnstable, Brockton, Fall River, Gloucester, Lowell and Lynn, students and teachers will have the option to remove their masks as soon as Monday, following votes by local school committees. Other districts delayed the change by a week or two, until March 7 or 14, to ease the potential impact of students’ travel and socializing during school vacation.

At least a half dozen school districts, including Boston, Cambridge, Chelsea, Springfield, and Somerville, have announced plans to keep mask mandates in place for now. Worcester’s School Committee voted to defer to the city’s Board of Health, which is expected to discuss the policy at a meeting on March 7.

Cases of the COVID-19 virus among the state’s students and school staff have been in decline for several weeks, following a surge in January. On Feb. 16, just before school break, the state reported 3,251 student cases and 670 among staff. More than 100,000 cases among students have been reported since the start of the pandemic.

The dialogue around school masks in Worcester, as in most places, has been divisive. During a recent School…

Boston Fed elects one Class A director, reappoints two others