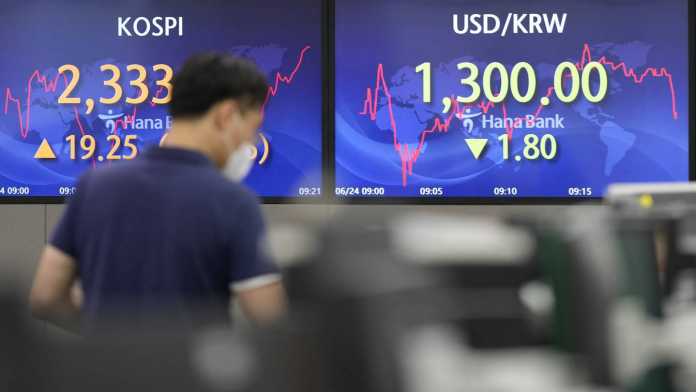 BANGKOK — (AP) — Shares were higher in Asia on Friday, tracking gains on Wall Street, where the market is headed for its first weekly gain after three weeks of punishing losses.

Market players are looking ahead to U.S. inflation data due next week. They appeared to shrug off preliminary data showing a moderation in activity in several countries including Japan.

A report Friday showed inflation in Japan remained at 2.1% in May, pushed higher by energy costs and a weaker currency. However, underlying core inflation, which excludes volatile costs for energy and fresh foods, remained at 0.8% and the central bank is unlikely to follow the example of the U.S. Federal Reserve and other central banks in raising interest rates, analysts said.

The Bank of Japan “isn’t convinced that this will be sustainable because wage growth remains soft and higher energy costs are weighing on corporate profits and consumer sentiment,” Marcel Thieliant of Capital Economics said in a commentary.

On Wall Street, trading was wobbly as investors focused on another round of testimony before Congress by Federal Reserve Chair Jerome Powell. He told a House committee the Fed hopes to rein in the worst inflation in four decades without knocking the economy into a recession, but acknowledged “that path has gotten more and more challenging.”

Trading has been turbulent in recent weeks as investors try to determine whether a recession is looming. The…

What can brown do for you? UPS makes the business case...