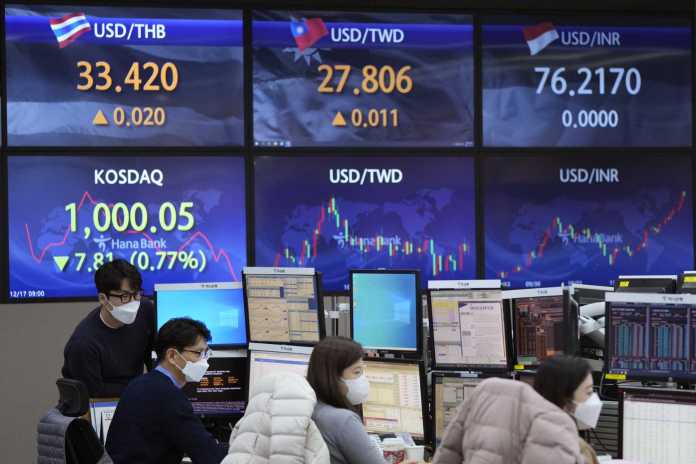 Traders were also considering other moves by global central banks. The Bank of England became the first central bank among leading economies to raise interest rates to fight inflation. The European Central Bank still plans to trim its pandemic stimulus, but not abruptly.

The Bank of Japan said Friday it would reduce some of its pandemic support measures, reducing purchases of corporate bonds to pre-crisis levels after March. It also extended by six months extra support for lending to small companies. But its board meeting otherwise kept ultra-loose monetary policy mostly unchanged.

“Japan’s economy has picked up as a trend, although it has remained in a severe situation due to the impact of COVID-19 at home and abroad,” it said in a statement. It noted continued risks from the pandemic and supply chain disruptions.

The Japanese central bank’s decision was “striking dovish” compared with other central bank moves this week, Marcel Thieliant of Capital Economics said in a commentary.

He noted that unlike other major economies, inflation is not a big concern. The BOJ has been trying and failing for years to attain an inflation target of 2%.

“The upshot is that the Bank of Japan will remain among the few central banks that won’t tighten policy for the foreseeable future,” Thieliant said.

US midterm elections: As Texas goes, so goes the nation?