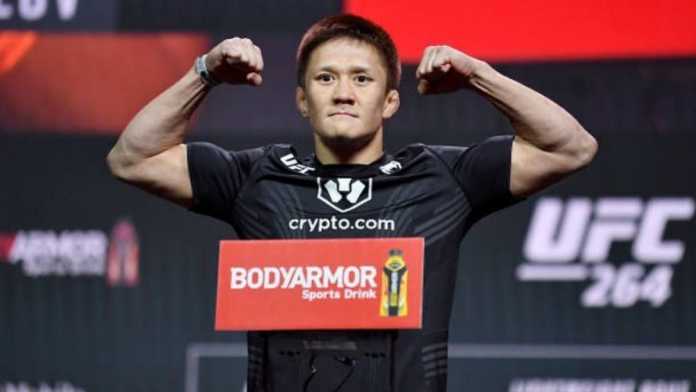 As crazy as it might sound, being a professional cage fighter may not be the most challenging thing in the life of Zhalgas Zhumagulov.

Zhumagulov is a Kazakh flyweight who has gone 1-3 in his UFC run thus far, hampering the hype that was surrounding the former Fight Nights Global champion. His most recent fight saw him suffer a TKO at the hands of Manel Kape over the weekend, who is also a highly touted prospect at 125lb.

However, it was his personal life that was the subject of conversation recently when he was speaking on the “Let Me Interrupt You” YouTube channel. Here, the 33-year old explained that, in addition to having 6 children, he is also married to two different women at the same time, a practice that he says is normal in part of the world.

“Yes, I have two wives—two wives and six children,” Zhumagulov said (h/t Low Kick MMA). “In principle, it’s normal. At first, there were challenges but now everything is fine.”

As far as how he divides up his time within his polyamorous relationship, Zhumagulov says that he goes back and forth between the two wives, spending one day with each before going to the next one. This helps to keep everyone happy and maintain his relationships with the pair of women.

”Well, where did I leave from? If I left, for example, from my second wife, I go to the first. If I left the first, I go to the second. A day here, a day there,” Zhumagulov said.

While this is commonplace in the region of the world that Zhalgas Zhumagulov hails from, polygamous relationships are only starting to grow in popularity in the Western world. Perhaps his example will open the eyes to others about the benefits of this type of lifestyle.

Cris Cyborg closing in on boxing match, says she hasn’t had talks with PFL