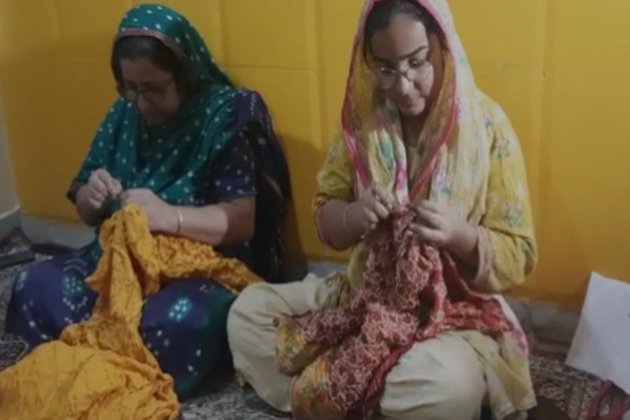 Jamnagar (Gujarat) [India], November 27 (ANI): The Bandhani-making business in Gujarat’s Jamnagar has been able to provide livelihood by generating employment for at least 50,000 people here.

Bandhani is a traditional art form used in making cloth material for sarees, dupattas, and stoles. It has given worldwide recognition to the city.

The men here dye the cloth and women tie them which is practically the most difficult and fine job of handwork done with grace.

Women here contribute 75 per cent in Bandhani making. The men here dye the cloth and women tie them which is practically the most difficult and fine job of handwork done with grace.

Bandhani artisan Salim told ANI that the profession of Bandhani making is as old as 5,000 years and has been in function since the Mahabharata era, as he has heard from his forefathers. He said that the Bandhani was made by both the Muslims and Hindus in the city.

Salim revealed that he is the seventh generation in his family in this business.

“The work of Bandhani making, which can be accomplished by being at the home only, has at least 50,000 Jamnagar-based people dependent on it,” Salim said.

He further mentioned that the government is also trying to play its role in promoting artwork at the international level. “Though it is a job to be done by hand and there is no involvement of machines. Both the men and the women are involved in it,” he said.

“Earlier around 50 years ago, there were chemical colours used for dyeing but the export demands the use of eco-friendly colours. The government informed these industries to make such colours as per our demand, as a result of which, 95 per cent of exported Bandhani are made with eco-friendly colours, as the chemical-rich colours often caused skin allergies to the Indians and Europeans,” he added.

Another businessman of Bandhani, Vibodh Shah said that the Jamnagar artwork is famous for its dyeing process and because of the water, which gives a fixed colour to it that does not get washed away easily.

He said that Jamnagar’s Bandhej artwork has been the only one to receive a Geographical Identity (GI) tag. The artisans here design the fabric as per the customer’s demand, he added.

“We send these to the foreign countries where there are the Marwari and Gujarati people. It is also used in Bollywood and most of the actors in TV serials wear Bandhani,” Shah told ANI adding that the government is making equal contributions as they train 50 people together. The government also helps the artists register themselves at the online portal that influences its sale, he said further.

“Because of the Vocal for Local campaign of the Indian government, we also get free stalls from their side and we get their support,” he added.

The Bandhani-making in Jamnagar has also provided employment to the women here with which they have been able to run their households and manage the education of their children.

Ten Hottest eCommerce Trends for 2022 and Beyond