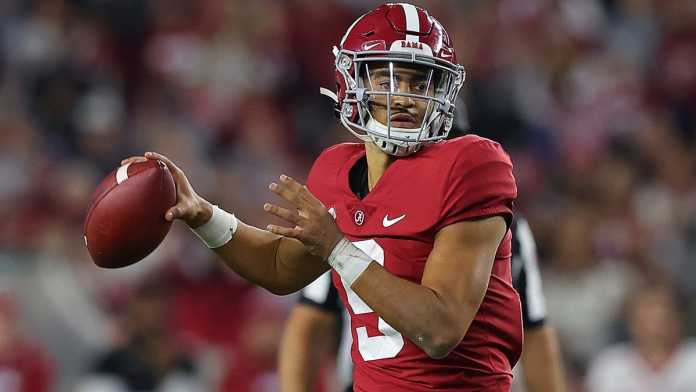 (CBS DFW) — The college football regular season ends this weekend, with plenty of conference titles still hanging in the balance. Bowl games and the College Football Playoff, of course, will follow, with bids still possibly riding on this weekend’s action.

CBS and CBS Sports Network have another strong slate of college football action scheduled for the long holiday weekend. Third-ranked Alabama meets Auburn in the Iron Bowl this Saturday. Arkansas, ranked 25th, takes on Missouri in more SEC action. Boise State faces #22 San Diego State, with a spot in the Mountain West Championship potentially on the line. And UNLV hopes its late-season surge can carry it over Air Force. CBS’s Norm Elrod talked to CBS Sports’ Aaron Murray about the matchups.

Auburn has lost three in a row. And they’re without quarterback Bo Nix, who suffered a broken ankle in the Mississippi State game, ending his season. Can Auburn keep up with third-ranked Alabama, or do you see the Tide rolling away with this one?

I see the tide rolling away. Obviously, for Auburn, this is a huge rivalry. We know things get really crazy, especially at Jordan-Hare, their home stadium. I just don’t think they have enough firepower on offense. They really lack consistency at the receiving position this year. Started off a little bit sluggish, got a little bit better toward the middle of the season. They decided to part ways with their receiver coach. They have regressed these past couple weeks at that spot.

Tank Bigsby has been kind of up and down. The offensive line has been up and down. And obviously they lost their starting quarterback. It’s just rough sledding right now, for that team. I think they’re a little bit demoralized, especially the way they’ve lost these past couple weeks. Being up big on some teams, they were up on Mississippi State. They came back and won that football game….

95 Best Things to Do in NYC for locals and tourists