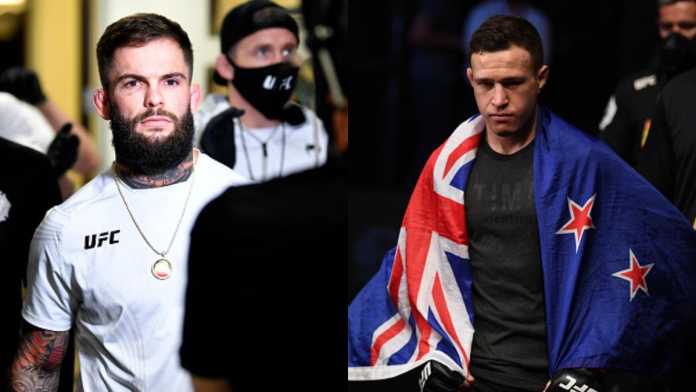 UFC flyweight contender Kai Kara-France is confident he can upset the odds when he welcomes former bantamweight champion Cody Garbrandt to 125 pounds at UFC 269.

On December 11, Kara-France will be looking to secure back-to-back wins for the first time since 2019. After building a five-fight winning streak, the New Zealander was signed by the UFC in 2018. Following a perfect 3-0 start to his career on MMA’s biggest stage, which included victories over Elias Garcia, Raulian Paiva, and Mark De La Rose, “Don’t Blink” fell to his first loss at the hands of current champion Brandon Moreno.

What followed was a period of inconsistency. Having rebounded against Tyson Nam in front of a home crowd at UFC Fight Night: Felder vs. Hooker, Kara-France was submitted by Brandon Royval last September. However, the 28-year-old burst back into contention with a memorable knockout against Rogério Bontorin at UFC 259 in March this year.

Now, looking to stake his claim for a rematch with “The Assassin Baby,” Kara-France will face former 135-pound king Garbrandt on the UFC 269 main card.

Garbrandt was considered one of the top men on the roster in 2016. After going 10-0 with nine knockouts, “No Love” faced Dominick Cruz, widely renowned as one of the best bantamweights of all time, for gold at UFC 207. With a five-round masterclass, Garbrandt secured his place on the division’s mountaintop.

Since then, the powerhouse has gone 1-4. Aside from a sole KO against Raphael Assunção, Garbrandt has fallen to losses against TJ Dillashaw, Pedro Munhoz, and Rob Font. He’ll now look to reinvent his career with a move down to 125 pounds.

During an interview with It’s Time For Sports, Kara-France discussed what it’s like preparing to face a name as big as Garbrandt’s. The New Zealander claimed a top opponent has been long overdue.

“It’s cool when the guys that, you know, I took their style and tried to put…