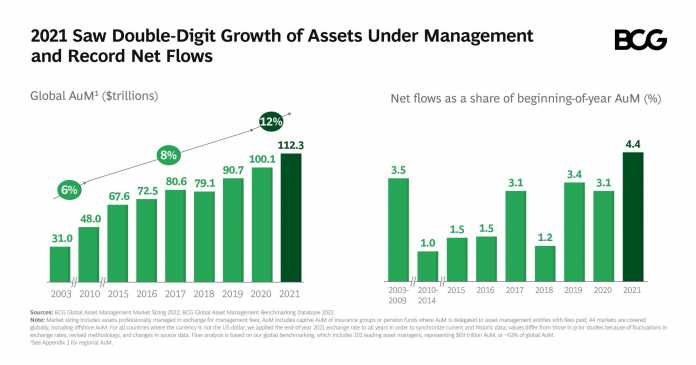 BOSTON, May 25, 2022 /PRNewswire/ — The asset management industry continued its unprecedented growth trajectory in 2021, with global assets under management (AuM) rising by 12% to $112 trillion, significantly above the 20-year growth average of 7%, according to a new report by Boston Consulting Group (BCG). Net flow rates were also at record levels, at 4.4% of total AuM (see exhibit). The report, titled Global Asset Management 2022: From Tailwinds to Turbulence—the 20th edition of BCG’s annual study of the industry—is being released today.

Strong performance in equity markets has been the key driver, representing 90% of revenue growth between 2005 and 2021. During the same period, revenues from net flows have been largely offset by investors shifting their asset-class mix toward lower-priced products and by ongoing fee pressure. Yet despite rising costs, operating profit margin rose to a healthy 38% in 2021, up from 36% a year earlier, as average AuM growth outpaced the increase in costs.

The passive market, which surged after the 2008 financial crisis in particular, has continued to draw strong interest from investors. By 2021, AuM in passively managed products had grown at more than four times the rate of their actively managed counterparts since 2003. The passive space has become increasingly concentrated, however, with almost 75% of all new capital over the past 5 to 10 years flowing to the top 10 global players—compared to around a quarter of positive net new inflows in the active market. As a result, the active market is currently offering players more opportunities to differentiate.

Debbie Gibson on her jet-setting dog, used bookstores, and bringing her...

The Hanover Theatre Partners With Two Worcester High Schools For Their...