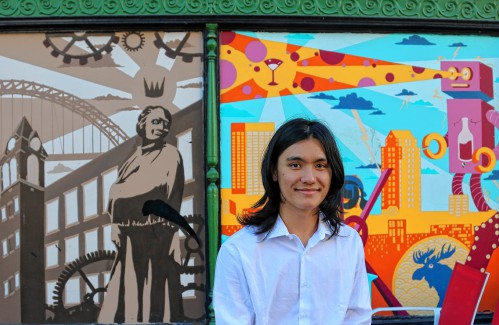 Manchester West High senior David Chestnut remembers hearing a distinctly unconvincing pitch from a college recruiter during a giant assembly about why he and his classmates should go to college.

The recruiter tried to get the high schoolers excited about the idea of coming to his campus. But as Chestnut looked around, he saw that few of his classmates were even paying attention, let alone interested.

This wasn’t surprising to him, though. Chestnut thought the assembly was just as ineffectual as the other nudges the school’s guidance counselors had sent encouraging students to go to college, mainly through email and intercom announcements.

Those guidance counselors had their work cut out for them. As of 2017-18, federal data showed that each guidance counselor in the Manchester School District served an average of 278 students. The statewide average is one counselor for every 568 students across all grade levels.

“It’s an assembly line,” Chestnut said. “They are trying to prepare you in the most generic way possible.”

Unfortunately, the generic doesn’t fit a student like Chestnut, the son of Filipino immigrants who didn’t graduate from college in America.

“My mother is a first-generation immigrant. She was the first of my family to attend college but she never graduated,” Chestnut said. “So when I was growing up in America with a single mother, it was very difficult for her to juggle her jobs and my education.”

Cases like Chestnut’s could be one of the reasons that, between 2016 and 2019, an average of just 43.7% of Manchester West’s students enrolled in a post-secondary program immediately after graduation — significantly lower than the statewide average of 56.1%.

The numbers get worse at other New Hampshire high schools. Newport, Farmington, Pittsfield and Nute are all below 40%, while the post-secondary enrollment rates for the top-performing schools were nearly double that of Manchester West, with Bedford, Windham, Souhegan and…