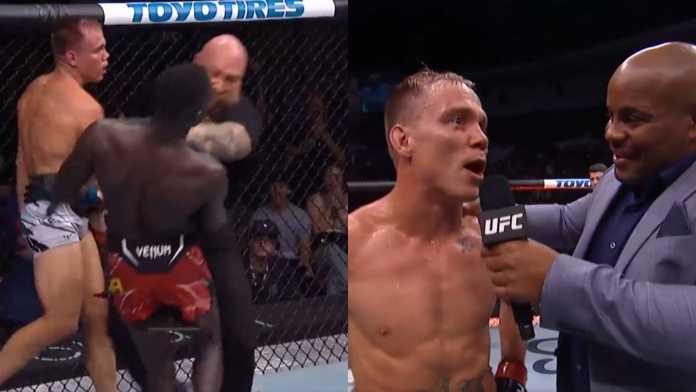 David Onama and Nate Landwehr put on a tremendous show for fight fans in their co-main event bout at UFC San Diego.

The event’s Fight of the Night appeared to be wrapped up after Yazmin Jauregui and Iasmin Lucindo impressed in their strawweight fight, but Onama and Landwehr managed to take things to another level in the following bout.

After a strong first round where he dropped Lanwehr, Onama appeared to fade a bit and opened up chances for “The Train” to get back into the fight. The 28-year-old was close to being finished at several points, but Landwehr provided some respite for Onama with his frequent appeals to the crowd in San Diego.

As tired as he appeared, Onama still had several offensive bursts where he reminded Landwehr not to get too confident. “The Silent Assassin” ended the fight particularly strong in the final moments, but Landwehr ended up walking away with a majority decision win.

Fighters React To Onama vs. Landwehr

Both featherweights left everything they had in the cage, and their fellow UFC fighters loved witnessing the action.

Landwehr is now on a 2-fight winning streak after he also submitted Ľudovít Klein last year. With the decision loss, Onama had his own winning streak snapped and is now 2-2 since entering the UFC in 2021.

MMA News has all of the results and highlights from UFC San Diego.

You Can’t Bash The UFC & Expect No Backlash

Jorge Masvidal uploads 2013 “Tales From the Grind” series showing him...