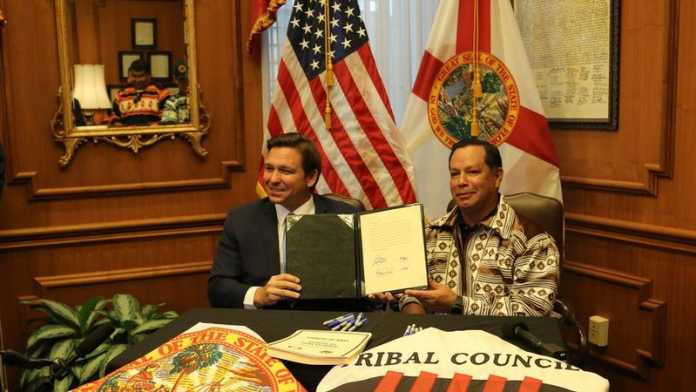 TALLAHASSEE — A federal judge has dismissed a lawsuit against Gov. Ron DeSantis and the Seminole Tribe over the gaming compact signed in April this year, giving the state an early victory in what is the first of three legal battles for sports betting in Florida.

U.S. District Court Judge Allen Winsor ruled Monday that West Flagler Associates, which owns Magic City Casino in Miami and Bonita Springs Poker Room, did not have standing to sue the state because it could not show that the governor’s actions harmed the parimutuels.

Under the deal signed by DeSantis and approved by the Florida Legislature, anyone in Florida over age 21 can start placing and collecting online wagers on sporting events “via the internet [or] web application” from anywhere in Florida. All transactions would go through servers located on tribal land in a “hub and spoke” model intended to bypass both federal and state law.The law implementing the compact became effective immediately and it was deemed approved by the U.S. Department of the Interior in August, after the agency said in a letter it would neither approve nor disapprove it.

West Flagler Associates, which is owned by the Havenick family, argued that the new compact not only hurts their business but also violates federal law. The parimutuels asked the court in July to halt the implementation of the portion of the compact relating to sports betting because it authorizes internet gaming outside of tribal land in violation of the Indian Gaming Regulatory Act and unfairly harms them in violation of the Fourteenth Amendment.

But Winsor rejected their claims.

He said that for DeSantis’ signing of the compact to have an impact on the parimutuels, his “official action must relate to enforcement—not enactment.” Winsor also said the state, specifically the secretary of the Department of Business and Professional Regulation, does not have the authority to enforce the conditions of the compact.