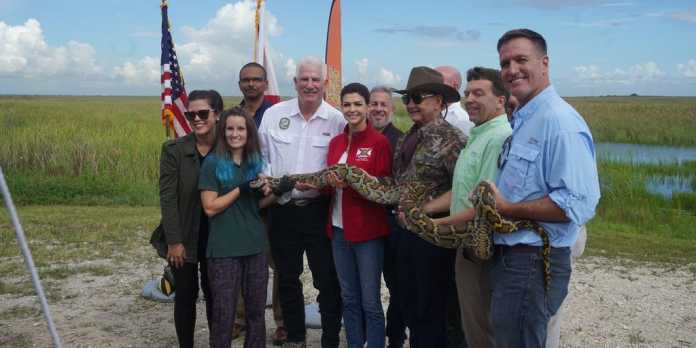 The annual python hunt is getting underway in the Everglades. It gets bigger every year. The hunt attracts hundreds of people competing for prize money. FOX 13’s Justin Matthews tells us about the rules of the hunt and why it’s important.

MIAMI – The annual Python Challenge is underway as snake hunters descend upon the Sunshine State to capture as many of the invasive species as possible and help biologists get a handle on the snake’s population.

On Friday, Florida’s First Lady Casey DeSantis helped kick off the event, which is scheduled to run through August 14.

Participants are encouraged to capture and kill as many of the snakes as possible, and the hunters who capture the most will be awarded cash prizes.

HOW TO WATCH FOX WEATHER ON TV

The Nation Park Service reports the first Burmese python in the Everglades was spotted in 1979, and the population ballooned during the 1990s.

Biologists say the snake is native to Southeast Asia and has led to a dramatic decrease in populations of several native species.

Studies show animals such as bobcats, deer, raccoons, rabbits and foxes have all seen declines as the 10 – 20-foot-long snakes are able to survive without threat from predators.

“These snakes are destroying the natural food chain, and you can’t have a healthy environment without a healthy food chain,” said Ron Bergeron, a member of the South Florida Water Management District.

The annual round-up started in 2013, and hundreds of snake hunters participate in the ten-day event each year.

The 2021 Florida Python Challenge removed 223 Burmese pythons from the Everglades, and it’s estimated more than 16,000 have been removed with the help of contractors since 2000.

To learn more about the event, visit flpythonchallenge.org.

University to celebrate contributions of its Black students, graduates