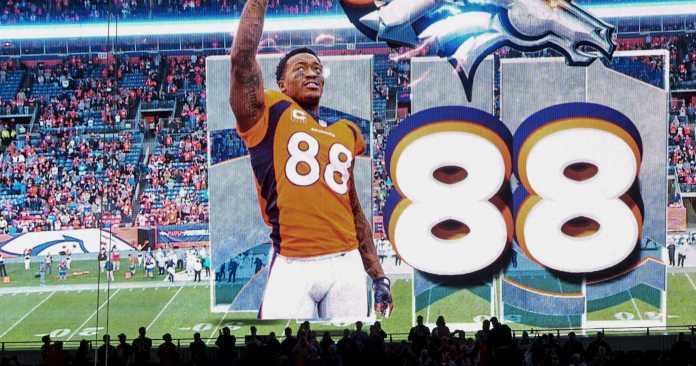 Former NFL wide receiver Demaryius Thomas’ death at age 33 in December was the result of “complications of a seizure disorder,” according to an autopsy report released to the public Friday.

Fulton County Medical Examiner said it was opinion of Boston University doctor that regarding Demaryius Thomas “there is not a direct relationship between (CTE) and the development of the seizure disorder.”<br>BU had determined Thomas had stage 2 CTE. <a href=”https://twitter.com/hashtag/9sports?src=hash&amp;ref_src=twsrc%5Etfw”>#9sports</a>

Thomas played in the NFL for 10 seasons, making four Pro Bowls and winning two AFC titles and one Super Bowl. He registered five straight 1,000-yard seasons for the Denver Broncos from 2012-2016.

The ex-Georgia Tech star played eight-plus years in Denver before being traded to the Houston Texans in 2018. He finished his playing career with the New York Jets in 2019.

CTE, as it is more commonly known, is defined by the Mayo Clinic as the term “used to describe brain degeneration likely caused by repeated head traumas.”

It’s unclear how much of a factor CTE played in Thomas’ death.

PSYCROPTIC Vocalist Names Who He Thinks Are The Big Four Of...