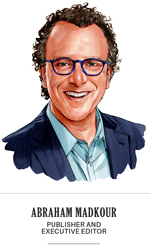 Five stories and names in the headlines (non-NFL) that were part of my conversations at the Super Bowl.

■ Greg Norman, LIV Golf and the Saudi Public Investment Fund versus the PGA Tour. This story has a little bit of everything — huge funding, personal animus, global reach, geopolitics, you name it. LIV Golf is floating a massive amount of cash to convince top golfers to play on a new Saudi-backed tour. That, in itself, makes this a big story for us to cover. In conversations that I had in L.A. with several high-level executives, it was clear they sense growing momentum around this effort and are concerned about its impact on the PGA Tour. Tour Commissioner Jay Monahan is incredibly well liked and respected, and sources expect him and the leaders of golf’s majors to become more forceful in dealing with this new threat. Insiders believe Norman’s team will be relentless in its pursuit of players, media partners and corporate sponsors, and Norman and his leadership team had a suite to entertain at the Super Bowl. Some who have seen the early marketing and competition plans around the new series are impressed, and no one doubts the financial resources behind the Saudis’ effort. As one top media executive said, “This could be the biggest sports business story of the year.”

Editor’s note: After SBJ went to press late last week, a number of top-ranked PGA Tour players committed to the Tour, raising questions about the ability of any rival tour to land players. Follow sportsbusinessjournal.com for the latest news and analysis on this story.

■ Media executives took notice of Phil Mickelson’s comments at the Saudi Invitational where he bashed the PGA Tour, accusing it of acting with “obnoxious” greed when it comes to a player’s media and image rights. Mickelson has long been seen as the perfect fit for the broadcast booth; network executives talked glowingly about his potential as a TV star for years. But I can’t see any PGA…

This Startup Accelerator Is Searching for ‘the Next Google in South...

The Biggest Career Crashes Of 2021