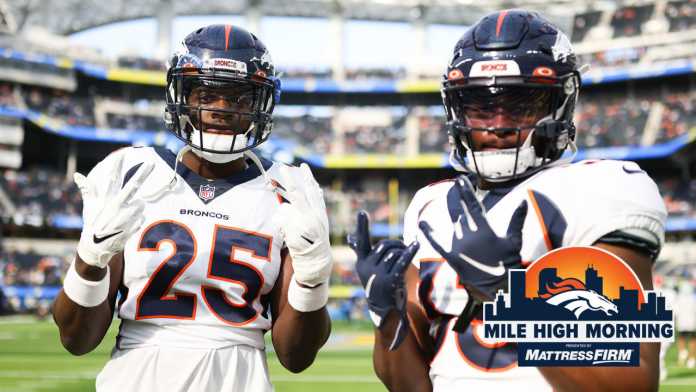 In 2021, the Broncos had the NFL’s most productive rushing duo, and Melvin Gordon III told “Good Morning Football” on Tuesday to expect even more from him and Javonte Williams in 2022.

“We’re gonna go crazy, man,” Gordon said. “We gotta go crazy. The young bull got so much talent, and we push each other every day in practice. We even got [Mike] Boone, who’s a good player, too, that’s going to help push us. I’m expecting the run game to be a lot better than it was last year for sure.”

A year ago, Gordon and Williams were the only pairing to each rush for at least 900 yards; with that under their belt, does that mean the Broncos have the best running back tandem in the league? “Good Morning Football” debated just that, and Will Selva was all in on the duo.

“Every time they get the ball … they’re punishing you and they’re doing it with a smile,” Selva said. “What I also love about this is the true split; each had exactly 203 carries last year, and guys, that is rare to see these types of splits with running backs. In addition to rushing for over 900 yards apiece, the two combined for 73 catches and 17 touchdowns. And let’s not forget that defenses were keying on them. They weren’t worried about Lock, Teddy B, the way they’ll have to worry about Russell Wilson. So to me, it is a true 50-50 split in Denver. They are both eating from the same plate. The only thing that’s missing here is a nickname. But we know, Kyle, there are going to be many more [Angry Runs] scepters in their future going to the Mile High City.”

Fits & Kicks: Best of the Broncos' fashion and style from...

Inexpensive wedding dresses that have that ‘wow’ factor