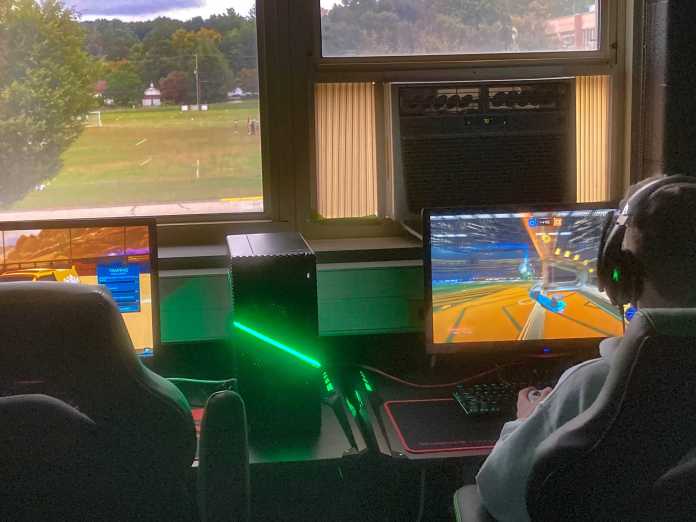 Jim Rand, a social studies teacher and coach at Griswold High School, stands in front of his players at 2:30 p.m. on a Tuesday afternoon giving a pre-game pep talk.

He reminds the players that the season is still young — it’s early October and only their second full match of the season. But he wants them to remember that every game brings them closer to the championships.

With that, it’s time for their warm-up. Fifteen or so students pull their equipment out of their bags — headsets, personal video game controllers, a microphone. Rand flips off the lights, and rows of computers light up fluorescent green. Without further ado, the teens log in.

Rand is coach of Griswold’s new Esports team — a group of about 18 students that compete with teams from across the country in a selection of online games.

Esports is becoming increasingly popular in high schools nationwide. The High School Esports League, which Griswold is part of, boasts over 3,400 participating schools, according to its website. The league hosts tournaments in 12 different online games. In the spring, the top four schools in each game will be invited to a national championship in Arlington, Texas, where they will compete for $150,000 in scholarship money.

The sport is also becoming popular at the college level, paving the way for high school students to win scholarship opportunities. The National Association of College Esports, which formed in 2016, counts over 170 member schools.

Rand explained that students involved in Esports do more than just play games. They are responsible for broadcasting the matches via the streaming platforms Twitch or YouTube and providing live commentary of the matches, which they do using a commentator’s box that the school purchased using part of a $67,000 — Public Educational and Governmental Programming and…