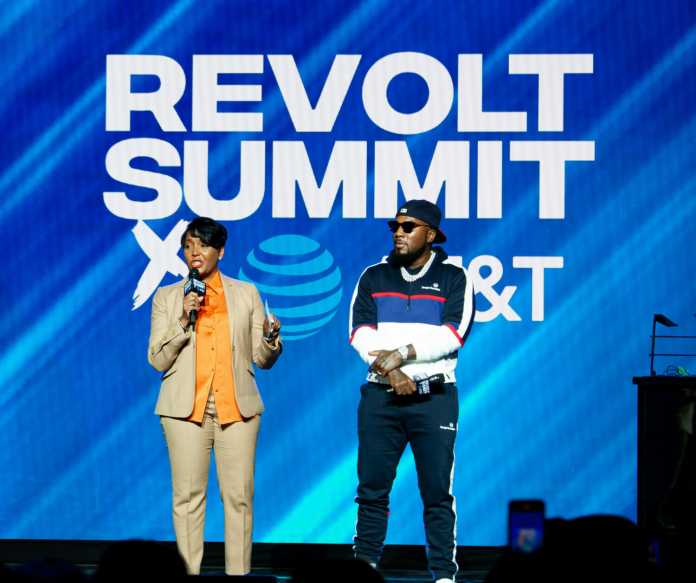 The REVOLT Summit x AT&T marked its in-person return earlier this month in Atlanta, Georgia with a bevy of panels, workshops, and one-on-one mentorship sessions aimed at empowering the next generation of Black artists and leaders. A number of entertainers, activists, athletes, and financial experts spoke at the three-day music conference, including Offset, Allen Iverson, Chance the Rapper, Angela Yee, and 2 Chainz. In addition, attendees were treated to performances from top hip hop acts like the City Girls and Meek Mill.

The summit kicked off on November 11 with a “Welcome to Atlanta” ceremony that included appearances by rapper and entrepreneur Jeezy and Atlanta Mayor Keisha Lance Bottoms, who cautioned attendees to practice COVID-19 safety protocols.

“I hope you all have a great summit,” said the elected official affectionately known as Mayor Keisha. “And remember, we’re still in the middle of a pandemic. So, if you’re not vaccinated, please keep your mask [on].”

The summit continued with the Dream in Black Pitch Competition, where entrepreneurs of color in the tech industry presented business ideas in a high-energy competition. Media personality and entrepreneur Angela Yee and digital architect Iddris Sandu served as judges during the competition and awarded Donald Boone with first place for his innovative BoxedUp Equipment Rental business.

“You got to always remind yourself where you’re from,” Sandu told BLACK ENTERPRISE after the competition. “I’m a kid from Compton, originally. And I always rep Compton no matter where I go and it’s important for people to see that and not forget where we come from because where we come from is essentially the building blocks to our future.”

The night ended with a comedy show led by Wild N’ Out stars DC Young Fly, Karlous Miller, and Chico Bean, which was followed by performances from Lil Yachty and City Girls.

Best of TV 2021: ‘Succession,’ ‘You,’ Meghan and Harry’s Oprah interview and more

1 dead after shooting in East Atlanta