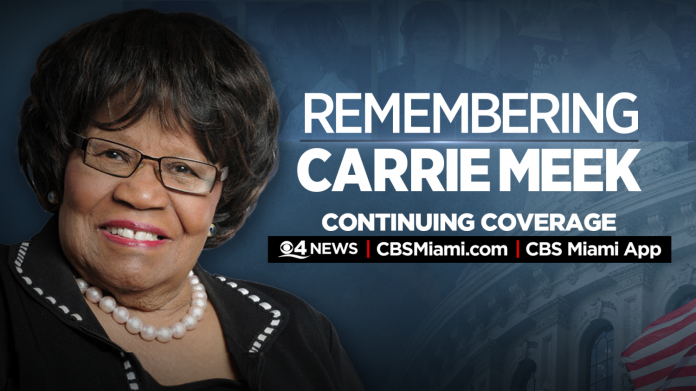 MIAMI (CBSMiami) – Congresswoman Carrie Meek made history at Miami Dade College and spent a good portion of her career there.

She was the college’s first Black professor, Associate Dean, and Assistant to the Vice President at Miami Dade College.

So, it’s only fitting that a wake for the respected trailblazer was held there Monday night, where hundreds gathered.

“To know Rep. Meek was to know someone who lived her life fiercely and unapologetically, working tirelessly for decades to promote justice and equality for all in Florida and beyond,” said Miami-Dade Mayor Daniella Levine Cava. “And not once did Carrie Meek ever shy away from using her voice to speak out against acts of injustice.”

Remembered for being an advocate for the Haitian community, her work in affordable housing and her efforts in education. She was also instrumental in expanding MDC’s Black student population.

“She was someone who served as an example, always compassionate, always willing to help,” said Miami-Dade College President Madeline Pumariega. “I remember the night the college named the meek center. She was beaming, because she knew that it would stand for what she stood for— hope and opportunity.”

Meek inspired others through her work.

“Whatever she asked me to do, I did it. So, my dear friend and protector, I am because of you,” says Miami-Dade School Board Member, Dr. Dorothy Bendross-Mindingall. “Children yet unborn will benefit because of her legacy.”

“As a family, we are so overwhelmed by the support this community has given the congresswoman,” said Meek’s son for Rep. Kendrick Meek.

Sunday’s viewing was the first chance for the public to pay their respects.

“I consider her a humanist, someone who cared about individuals. Who cared about human beings, it didn’t matter if you’re Black,…

Inside the world of ‘collectives’ using name, image and likeness to pay college athletes, influence programs