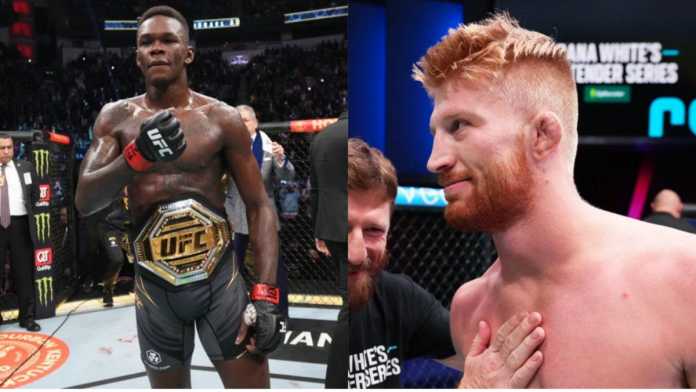 Bo Nickal feels that he stands a good chance against middleweight champ Israel Adesanya if they fought today.

Nickal, a former NCAA wrestling national champion, has been hailed as one of the most exciting new MMA prospects in recent years. And so far, the 26-year-old has lived up to expectations. In June, Nickal earned a 33-second KO in his professional MMA debut, and earlier this month, he took just over a minute to submit Zachary Borrego on Dana White‘s Contender Series.

That win attracted plenty of acclaim from fans and fighters alike, with many calling on the UFC to sign Nickal immediately. UFC President Dana White, however, disagreed. Citing Nickal’s inexperience, he feels “The Allen Assassin” must prove himself once more in DWCS before unleashing him on the UFC’s best.

Given his wrestling credentials and the substantial hype behind him, Nickal isn’t short on confidence. And naturally, neither is his manager Malki Kawa, who believes the 26-year-old has the potential to reach the lofty MMA heights that his former client, Jon Jones, apparently failed to live up to.

Speaking to Ariel Helwani on The MMA Hour, Nickal expressed just how confident he is. When asked how he would perform against Adesanya — the most dominant middleweight champ since Anderson Silva — Bo said that his wrestling style would set him up for success.

“I would love that fight, that’s like a dream matchup for me,” said Nickal. “Obviously, with all due respect, he’s one of the greatest middleweights of all time, great champion, but I think people say this a lot; styles make fights, so with that being said I feel confident in that matchup, I feel very good about it and I would love to have that fight some time in the future, that would be literally a dream for me.”

Fighting Adesanya in the future, after Nickal develops as a mixed martial artist, is one thing. Doing so now is another…

“Of Course He’s Gonna Do That”