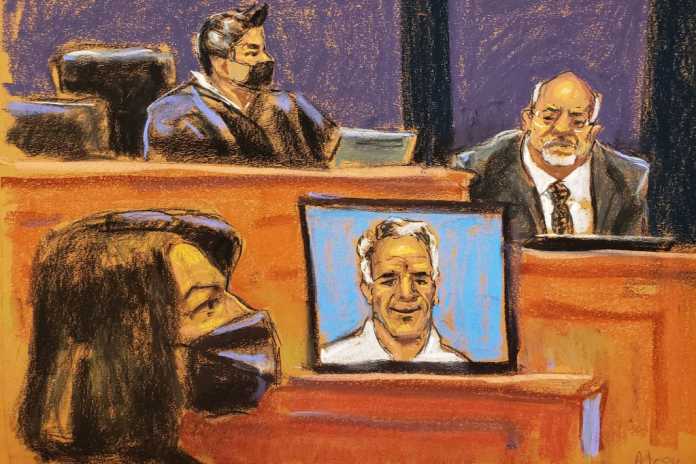 Jeffrey Epstein’s longtime housekeeper on Thursday testified that Ghislaine Maxwell was the “lady of the house” at the powerful pedophile’s Florida mansion — and that countless young women hung out there, including two who appeared to be minors.

Juan Alessi dished about working for the late financier in Palm Beach for more than a decade, telling a Manhattan jury he saw “many, many, many females” in their 20s, who were at times topless, socializing with Epstein and Maxwell.

Alessi recalled seeing two girls who appeared to be minors over the course of his employment, which ended in 2002. He identified one of the two as “Jane,” — a Maxwell accuser who testified earlier this week — describing her as a “striking, beautiful” girl who looked to be around 14 or 15.

The other minor, Alessi said, was Virginia Roberts Giuffre, who has accused both Epstein and Maxwell of sex-trafficking her when she was a teenager.

Alessi described how Maxwell first met Giuffre in the parking lot of Donald Trump’s Mar-a-Lago resort, where she ordered him to stop the car so she could hop out to talk to the young blonde.

Either Epstein or Maxwell would instruct him to pick up Jane or Giuffre and shuttle them to the mansion, Alessi testified.

Asked to identify the defendant, Alessi appeared to pause slightly before correctly referring to Maxwell. As their eyes met, she appeared to nod.

During his testimony, he recalled how Maxwell had a Yorkshire Terrier dog named Max from the time that he met her in 1991. On Tuesday, Jane testified that Maxwell had the same breed of dog when she met her and Epstein in the summer of 1994 at the age of 14.

“She traveled with Ms. Maxwell all the time,” Alessi said of the pooch, adding that he had to give Max a bath before each trip.

Alessi described how the British socialite ruled the home with an iron fist, giving him a lengthy checklist of instructions — including how staff should present themselves and address her and Epstein — something he found “very degrading.”

Maxwell, he testified, once told him that Epstein didn’t like being looked in the eyes.

“You should never look at his eyes,” he said Maxwell ordered him.

Prosecutors also asked Alessi to flip through a 58-page employee handbook and asked him to say which of the dozens of pages he recognized.

A juror appeared to nod off during the painstakingly long process, after which Alessi went back and was asked to reach some of the instructions aloud.

“Remember that you see nothing, hear nothing, say nothing, except to answer a question directed at you,” one of the commands read.

“Try to anticipate the needs of Mr. Epstein, Ms. Maxwell and their guests,” another one stated.

Alessi said Epstein was at his Palm Beach home, one of several residences he owned, nearly every weekend, and that Maxwell accompanied him “95 percent of the time.”

Each of them had a 2-inch thick black or blue contact book filled with hundreds of entries, he said. There was also a directory kept with the names of employees that was updated once a year.

Alessi described a close-knit relationship between Epstein and his alleged madam.

Even though she had her own room at the mansion, “she was sleeping in Mr. Epstein’s bedroom,” he said.

Is Your Plastic Actually Being Recycled? | NYT Opinion