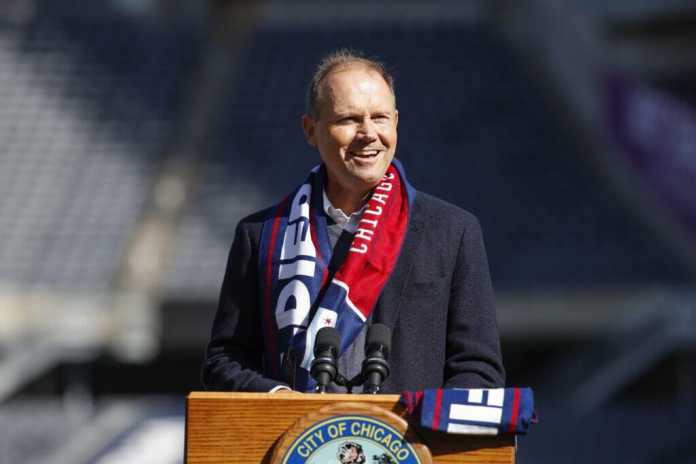 Sitting in a glass conference room a few stories above the Chicago River and the Dusable Bridge, one of the most exciting owners to join MLS during this era of expansion considered the work he had done and still had to do in his effort to resuscitate what was once one of the best franchises in Major League Soccer.

Joe Mansueto purchased the historic Wrigley Building in 2018, about one year before he completed his purchase of the Chicago Fire. The skyscraper was built 101 years ago as a headquarters for the chewing gum company. Standing where Michigan Avenue meets the river, its white glazed terra-cotta facade and architecture based on the Giralda Tower in Sevilla, Spain is a distinguished part of the city’s skyline.

Mansueto’s purchase of the Wrigley, as well as the historic Belden-Stratford Apartments in Lincoln Park and a $50 million investment in The Terminal, an office campus in the Humboldt Park neighborhood in Chicago, hint at a strategy built around a love for the city proper. The Hammond, Indiana-native built his business, Morningstar, here, and it’s still headquartered in downtown Chicago. But even after stepping down as CEO in 2017, his decisions seem to remain centered around the city.

“I’m trying to, in my small way, kind of improve the city and the experience that people have living here,” Mansueto told The Athletic.

The Fire are celebrating their 25th season in MLS this year, but they are definitely in need of restoration within their home town. Mansueto, who purchased the Fire from Andrew Hauptman for approximately $321 million across two transactions in 2019, is intent on accomplishing that feat.

The 65-year-old billionaire  has a willingness to spend and a desire to grow MLS. His eyes are locked on the long-term health of the club.

3 EASY steps to Winterize Your Sprinkler System in Houston,Texas

Man accused of killing supervisor with gunshot to head