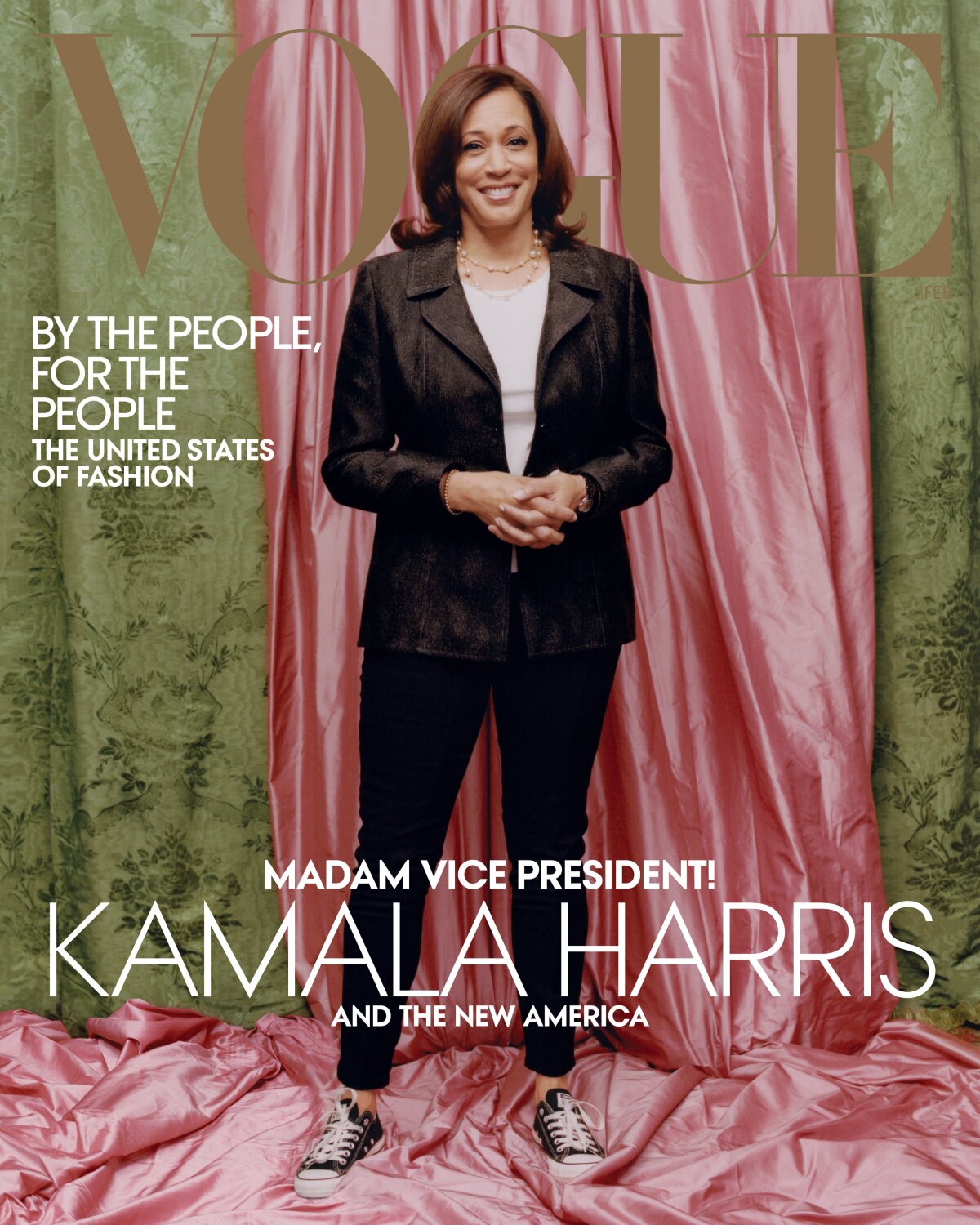 Vice President-elect Kamala Harris’ Vogue cover is getting a lot of hate online.

Harris was revealed to be the magazine’s February 2021 cover star Saturday night when two separate images were leaked by the Twitter account Models Daily. In one photo, Harris is pictured wearing a formal powder blue Michael Kors Collection suit. In the other, she wears a dark Donald Deal blazer, jeans and Converse Chuck Taylors.

The latter image has come under fire for its lighting, backdrop and wardrobe direction. It was initially believed to be fake until Vogue confirmed both covers in a tweet Sunday morning.

The photos were met with swift backlash on social media, with many people calling the images disrespectful, unflattering and even racist. In addition — decrying “lazy” art direction — many complained that Harris’ skin tone appeared washed out and that the full-length portrait resembles a test shot.

“The team at Vogue loved the images Tyler Mitchell shot and felt the more informal image captured Vice President-elect Harris’ authentic, approachable nature — which we feel is one of the hallmarks of the Biden/Harris administration,” a representative from Vogue said in a statement. “To respond to the seriousness of this moment in history and the role she has to play [in] leading our country forward, we’re celebrating both images of her as covers digitally.”

Commentators have speculated that the photo generating the backlash is the one intended for its print issue, which goes to subscribers and newsstands. Vogue has not commented, but the leaked image from Models Daily does bear a bar code.

Mitchell, whose dynamic shots of Harry Styles for Vogue’s December 2020 issue drew much attention on social media, made history three years ago as the first Black photographer to shoot a cover of American Vogue. The photo he shot of Beyoncé for the magazine’s September 2018 cover is now in the Smithsonian National Portrait Gallery‘s permanent collection. The photographer shared only the more formal portrait of Harris on his Instagram and Twitter pages.

The cover on the left (with the Chuck Ts) had no business being selected or even offered as an option.

This speaks volumes of how you view our Madam Vice President.

Why do you have her in sneakers with my Sorority colors as backdrop?? This is DISRESPECTFUL to Kamala, my Sorors, and to black people! In no way this is how you shoot the first black VP or any VP for that matter. Pull it now!!!

This is why I stopped buying W fashion magazines in my late teens. They’re racist, rarely ever have someone that looks like me on the cover, and when they do, the photos are trash. Just RACIST AF! @voguemagazine

The cover on the left is the least dignified & greatest insult to a remarkable woman who shattered multiple glass ceilings & is now the most powerful woman in the US. Surely editors have better sense & taste to refrain from disrespecting the 1st VP. Put in some effort

As California schools reopen to in-person instruction, students and families decide if it’s right for them

The new boxing spectacle? Triller’s Jake Paul fight crammed with celebs pulls in up to $75 million in PPV sales – The Athletic

Jokic and Denver visit Curry and the Warriors