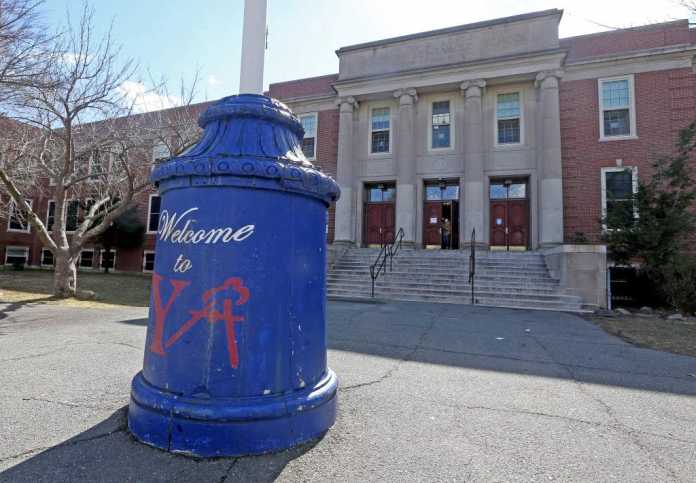 A loaded 9 mm pistol was found inside a city school this week, renewing cries for police to be allowed back patrolling the hallways.

The gun was found in a storage room at the Young Achievers Science and Math Pilot K-8 School, according to Boston Police investigating the incident.

“If there are armed security at City Hall, the State House and Mayor (Michelle) Wu’s house — not to mention at elite, mostly white universities like Harvard and MIT — then the mayor needs to explain why white adults are protected while children whose only crime is being Black and poor are not,” said the Rev. Eugene Rivers, a vocal leader in Boston for neighborhood rights.

Last November, the principal of the Dr. William Henderson K-12 Inclusion School was beaten unconscious, forcing school officials to cancel classes for several days and to come up with a new plan that would allow for a safe return.

And on March 13 of this year, a girl was brutally beaten at Boston Arts Academy by a group of students who had been threatening to “jump” her, according to police. She was taken by ambulance to Boston Children’s Hospital, where she continued to receive threats via text to hunt her down there, police said.

The girl told officers she was extremely shaken and feared for her life, according to Boston Police, who are also investigating that incident.

“Mayor Wu uses as one of her marketing shticks that she’s a mother,” Rivers said. “So why would she deny children of color the same protection she wants for her own kids?”

In 2020, police reform legislation ended the requirement for districts to have at least one resource officer in each school.

Since July 1, when the law took effect, BPS’s Office of Safety Services has unarmed “safety support specialists” provide security to the city’s 121 schools with 48,957 students.

“The safety of our students and staff remains a top priority,” Superintendent Brenda Cassellius said in a…

Schools looking at alternatives to shuttle buses for students during Orange...