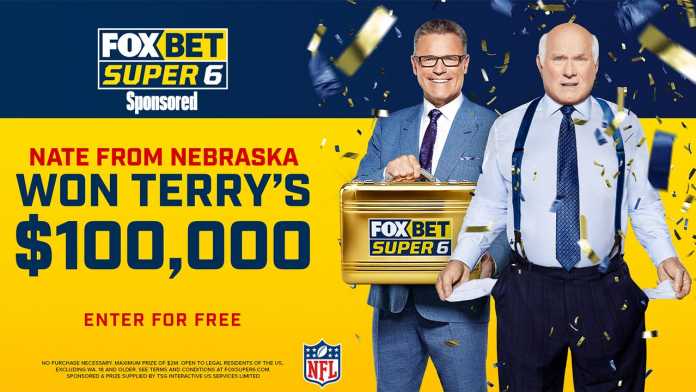 Nate Colgrove is like many who work in the Midwest – working at a landscape business and trying to make ends meet as fall’s glow turns into winter’s chill.

“It’s hard in the winter and you just want to hold on to enough,” said the 45-year-old from Springfield, Nebraska.

So as he settled in to watch football last weekend and broke out his phone to enter FOX Bet’s Super 6 NFL Sunday Challenge contest, his winter got a little better.

“This is going to get me through and get next season started,” Colgrove said smiling on Wednesday morning.

That’s because Nate took home the $100,000 jackpot of Terry Bradshaw’s money from last weekend by correctly identifying all six NFL winners and their correct margin of victories from the free-to-play FOX Bet Super 6 app.

“It’s free, it takes a couple of minutes, and the planets aligned for me,” the Bears fans said on FOX and Friends this morning.

Nate knew he won the jackpot when watching the end of last week’s FOX marquee game between the Dallas Cowboys and the Kansas City Chiefs. After correctly identifying that Kansas City would win by 10 to 14 points, he celebrated when the Cowboys’ final interception was thrown with just over one minute to play.

“On that last play, my fiancée started jumping up and down,” Colgrove said. “I threw my son up in the air. And I had to keep checking my phone five times just to make sure (it was real.)”

“I’m not going to have a truck or a car payment loan like I’ve had for 20 years,” Colgrove said.

Nate is just the latest winner in FOX Bet’s Super 6 contest. The free-to-play app is available nationwide and nearly $6 million has been given away since it was…