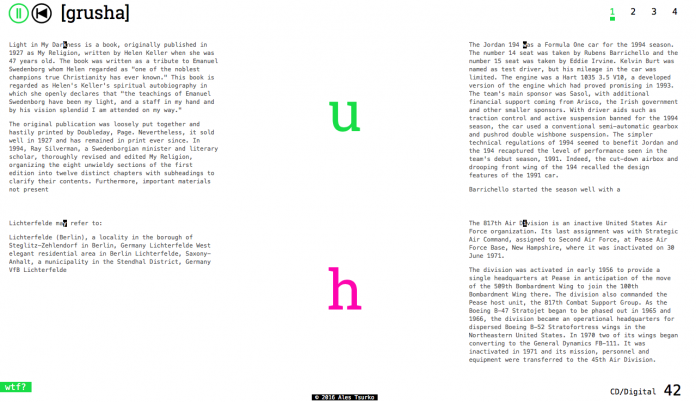 Generated in real-time from random Wikipedia articles, microscale is a web-based, generative album, also available as a rendered physical CDR and digital download. Each article functions as a step sequencer, where the letters are the sequencer steps and the track titles are regular expressions that switch the steps on and off. The web version is also hackable – the regular expressions, samples, tempo and other parameters can be edited or replaced – allowing microscale to be used as an instrument and sequencer for the listener’s own music.

The concept behind microscale is to show that through transforming one media (text) into another media (music), the meaning can be transformed – the article has its own meaning, but the music generated from the article has a completely different one.

The source code is available. As well as the physical version as individually rendered CDRs with every disc totally unique.

How to turn your old laptop into a Chromebook for free...

Live Stream Games from Your Smartphone Without CAPTURE CARD