The first look at bilingual mailers, aimed at Latino voters in Super Tuesday states from billionaire Mike Bloomberg’s campaign, show that he is directly taking on President Donald Trump’s zero-tolerance immigration policy that resulted in child and family separation.

The mailers call the policy “cruel,” and underline the message that 1100 children were separated from their parents even after the administration decided to end the policy.

The roughly $30 million bilingual direct mail blitz, first reported by Mediaite, also includes digital ads aimed at Latinos in Super Tuesday states, a source confirmed, which may be an effective way of reaching both young and older Hispanic voters. Obama and Clinton veterans, as well as Latino vote experts consider the Bloomberg mail and digital campaign to be the biggest Super Tuesday spend aimed at Latinos ever.

It comes on the heels of a Monday report that Bloomberg was ramping up his spending, which is already approaching $500 million, including digital ads targeting Sen. Bernie Sanders, who Bloomberg is hoping to unseat as the frontrunner starting with Super Tuesday.

The child separation mailer is currently being sent to voters in Texas, Colorado, Arkansas, Oklahoma, Tennessee, and Utah, the Bloomberg campaign confirmed to Mediaite. It will also be sent to California and other states in a second wave. The campaign also said the bilingual mailer aimed at Latinos on immigration is one of three, with another one on health care, and another entitled “Respect,” that touches on health care, homeownership, and college affordability and accessibility. 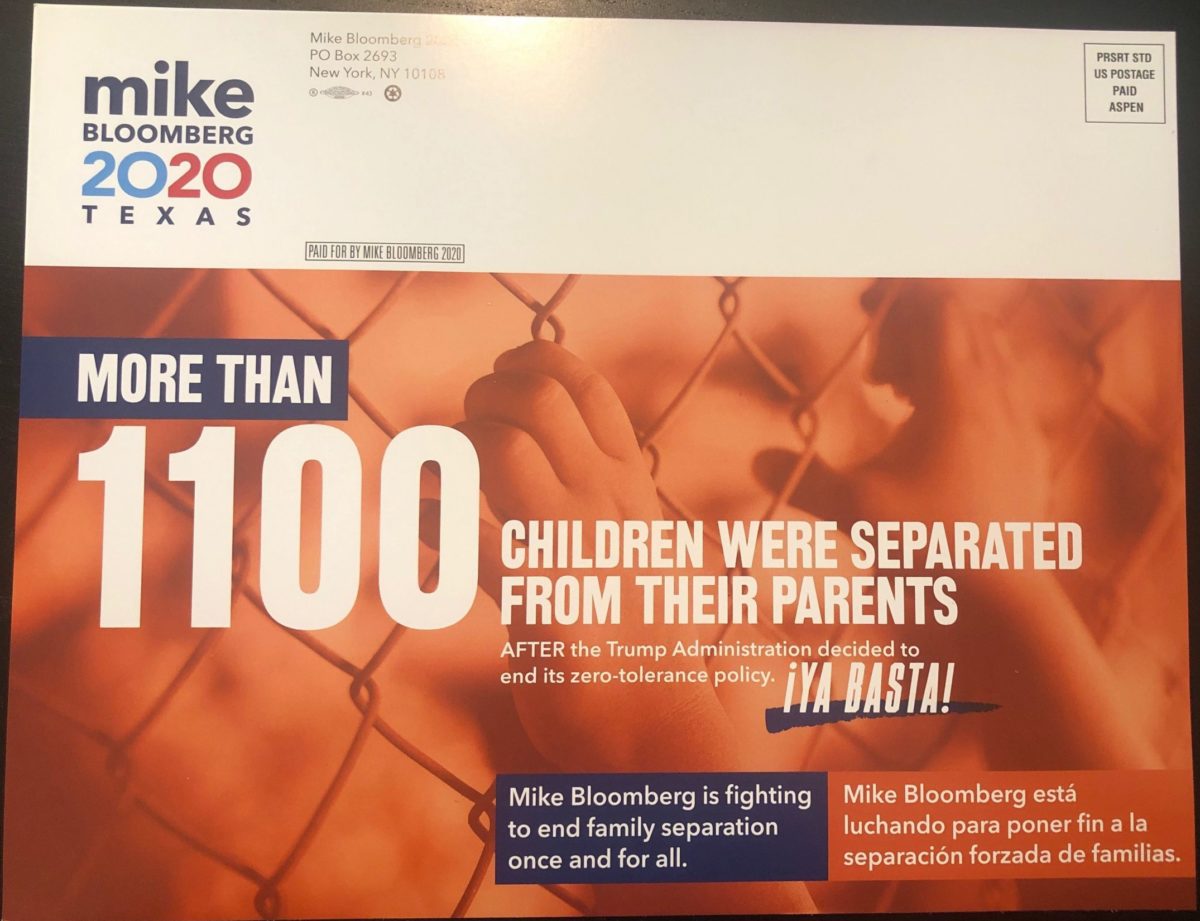 Calling himself a “grandson of immigrants,” Bloomberg’s mailer says “public reaction forced Trump to end his cruel zero-tolerance policy” but “before he did, thousands of children had been separated from their parents.” The mailer, which reminds Texas voters they can vote early until February 28, and vote in the primary on March 3, says he will end family separation, reunify families, protect Dreamers, and increase English-language courses and services.

The mailer, along with others, is going out to Latino voters in Super Tuesday, which include Texas and California, where there are a combined 13.5 million eligible Hispanic voters, more than 30% of the electorate in each state.

Experts are split on the effect the avalanche of mail could have on Latino voters. Bloomberg is not well-known so a focus on who he is and why he’s the strong candidate Democrats are looking for to beat Trump could work, some say.

“Texas is just a more conservative state, it was Bush country not long ago,” a Democratic strategist from Texas told Mediaite. “I don’t think that anyone is convinced Bloomberg is a Democrat, but Texas Latinos have a tendency to embrace more moderate candidates.”

“The Democratic electorate here is not that conservative and hasn’t been for a while because so many new Texans are coming here from out of states and expanding the electorate, which is what led to 14 seats in the legislature and two seats in Congress in 2018,” he said. 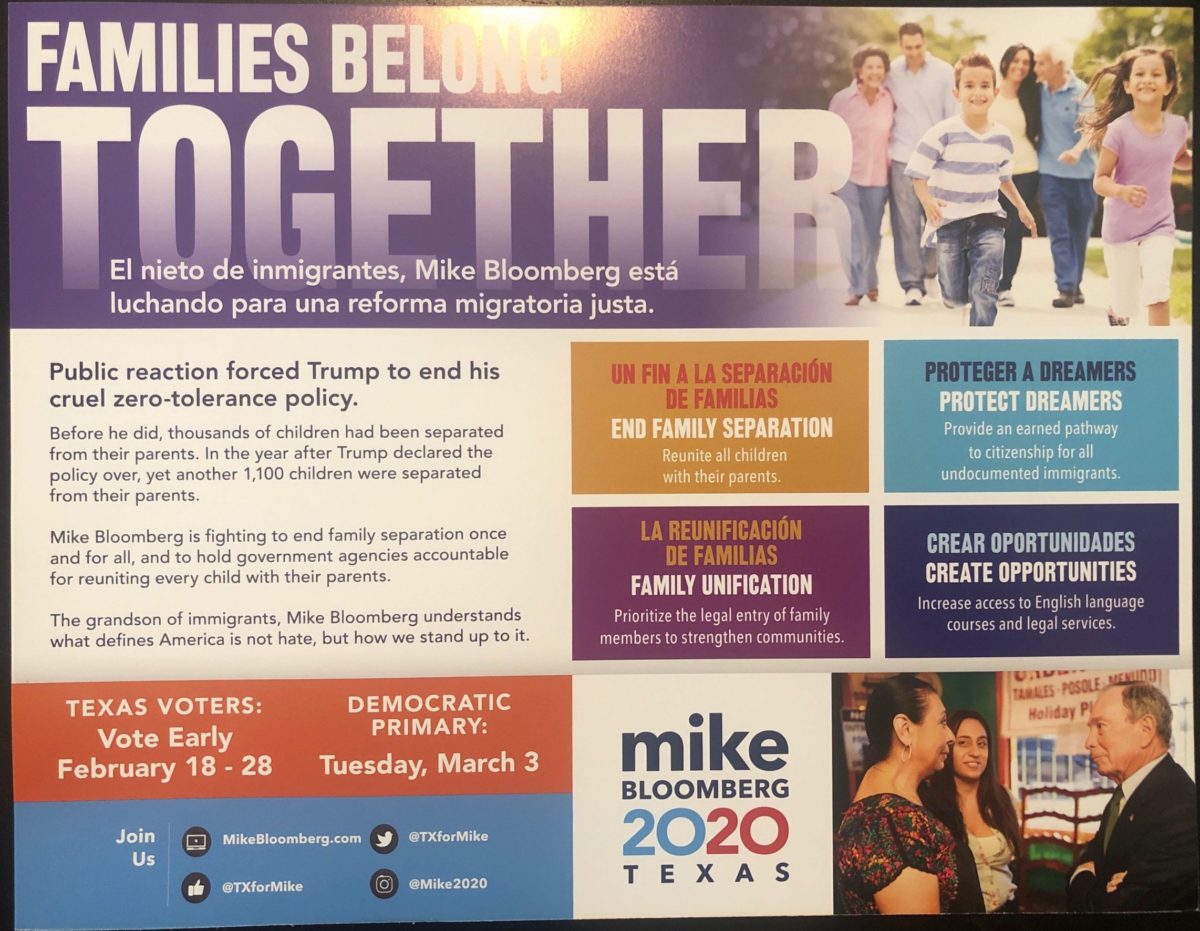 In California, which is also receiving bilingual mailers before Super Tuesday, Democrats said its crucial for Bloomberg to go beyond his boiler plate Trump-focused message to voters across the country if he hopes to bring along the Latino voters Sanders has shown early strength with after a dominating showing in Nevada.

“If the pitch is vote for me because I’m the guy, who gives a shit?” Sacramento Democratic strategist Steven Ybarra told Mediaite. “If his pitch is, vote for me to get kids out of concentration camps, then that’s a pitch. That’s something that nobody’s doing and I don’t understand why.”

Espinoza said he understands the sentiment, but disagreed that Bloomberg is the right messenger on child separation and Trump. “He’s telling them a story they know, but how is he, a man they don’t know, the hero?” he asked. “How is he the savior in this story?”

The Bloomberg campaign noted that the Latino electorate is not monolithic — a third-generation, Mexican-American business owner in Northern California, is different than a first-generation immigrant from Mexico in El Paso — but said policies don’t change depending who you’re speaking with and framed Trump as the ultimate focus in persuading voters, Latino or not, to support the former New York City mayor.

The mailers sent to Hispanics in Super Tuesday states aren’t all Latino-focused. Some are the same ones that all voters receive, introducing Bloomberg to voters through a mix of biography, his background as a businessman, and taking on Trump. And Texas voters aren’t necessarily used to being the object of attention in presidential races.

In El Paso, Norma Fincher, 63, was one of the voters who received a mailer that looked like a letter from Bloomberg’s desk addressed to her. “I put the letter away, because I liked it more. It felt personal, made me feel special, and made me happy that he would send me a letter,” she told Mediaite in Spanish. “It had a positive impact on me.”

Fincher said she plans to vote for Bloomberg in the Texas primary.

Have a tip we should know? [email protected]

What Cancer Patients Need to Know about Coronavirus COVID-19 | Salud...

Tell us Your story during this pandemic Virus Covid 19.

Hispanic Foods market to grow at a CAGR of XX% during...

Most Renters Will Not Receive Protections Under WH Proposal

Destination Marketing in Latin America According to Hilton