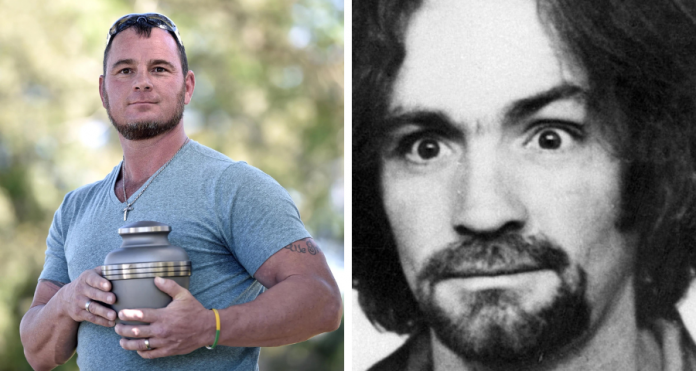 Jason Freeman, 46, is a former mixed martial arts fighter from Bradenton, Florida, who claims to be Charles Manson’s grandson.

Freeman was hoping to inherit the notorious killer’s estate when a mystery man stepped in at the 11th hour, claiming to be Manson’s rightful heir.

Freeman was hoping that at a Los Angeles probate court hearing Friday, Judge Ruben Garcia would declare him sole heir to Manson’s estate – his belongings plus potentially lucrative music and artwork rights, according to a report from The Daily Mail.

Memorabilia collector and Manson pen-pal Michael Channels, who maintains he has a 2002 will that leaves everything in Manson’s estate to him, was Freeman’s biggest threat to claiming the stash.

Freeman was hoping that the judge would dismiss the will and grant him the items as he states that he is the rightful heir.

Now, Daniel Arguelle, 62, popped up out of the woodwork and states that he’s the mass murderer’s ‘biological son’, thanks to a one-night stand his mother had with Manson back in 1959.

Freeman has always maintained that his father was Charles Manson Jr. who couldn’t live with his shameful name so changed it to Charles White, and eventually killed himself in 1993. Judge Garcia decided in June that he was satisfied Freeman is the son of Charles Manson Junior, based on an Ohio court’s 1986 finding that Manson Jr. was ordered to pay child support to Freeman’s mother.

Arguelles tried to locate his biological father by sending a DNA sample to Ancestry.com.

The results, said Arguelles, showed a ‘close relative match’ with Michael Brunner – who was one of the original claimants in the long-running fight over Manson’s estate, insisting he also was a biological son.

The DNA evidence showed that Brunner and Arguelles ‘have a 99.99998% probability that they share the same father,’ he added in the court documents.

Ngannou Working With GLORY Kickboxing Champion Ahead Of UFC 270