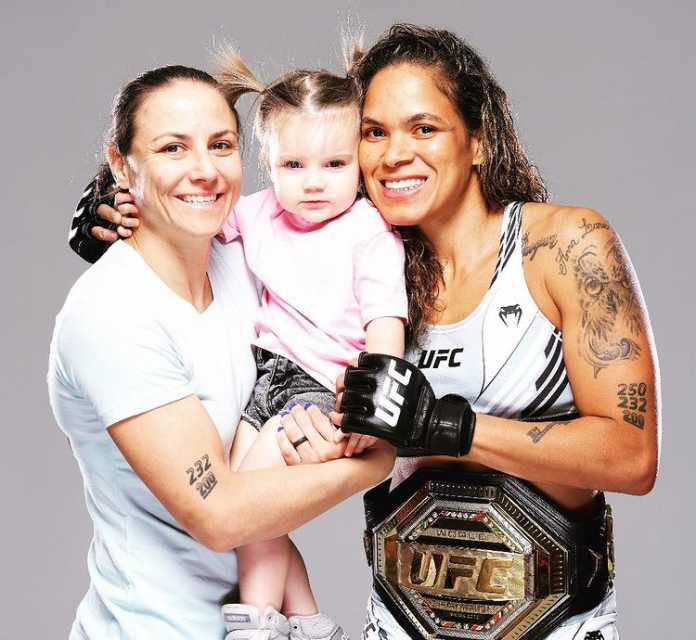 After being absent from active competition for over the past year, Nina Nunes was victorious in her return on Saturday. With their first matchup being postponed earlier this summer, Nunes faced Cynthia Calvillo at UFC San Diego as both former strawweights battled in a flyweight contest. The action was back-and-forth throughout the fight and when it was all over, Nunes picked up a split-decision victory, but it was what happened after the fight that got the most attention.

During her post-fight interview with Daniel Cormier inside the Octagon, Nina Nunes announced her retirement from active MMA competition and noted she will be focusing on adding to her family and continue to coach her teammates. Currently, Nunes and her wife Amanda Nunes, the UFC’s women’s bantamweight and featherweight champion have one daughter together, Raegan, who was born in 2020. Right before the interview with Cormier began, Nunes dropped her gloves in the middle of the Octagon, and Cormier asked her if she was walking away from the sport.

Nina Nunes announces her retirement at #UFCSanDiego after a more than decade long MMA career 👏 pic.twitter.com/1YVk9sP885

“I am. As a fighter I think I’ve done what I wanted to. It started as a hobby, I got all the way here. I’m going to focus on coaching and bringing up those girls that are struggling right now.”

Asked about her fight performance in the flyweight division, Nina Nunes admitted she believed that 125-pounds was always the best place for her, but her focus is still to focus on growing her family and begin coaching more frequently.

“I feel great at 125, it’s where I should’ve always been but I want more babies. So, I’m stepping away to have another kid.”

During her post-fight press conference backstage with the media, Nunes stated she considers her win over Claudia Gadelha as the most important victory of her career. Nina Nunes will end her career with a 11-7 record in her…