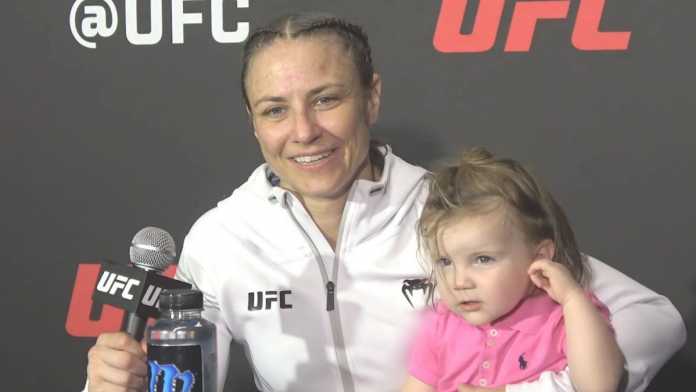 The 36-year-old picked up a split-decision win over Cynthia Calvillo on the UFC San Diego prelims before leaving her gloves in the cage and announcing it was her last fight.

With her daughter on hand to assist with any questions, Nunes was asked at the event’s post-fight press conference about the emotions leading up her final fight.

“These last few months have been heavy,” Nunes answered. “Amanda’s rematch, opening a new gym, moving, having a 2-year-old. It’s just been a lot. That emotion of Amanda losing after a long time, I just wanted her to secure that while trying to coach her and train at the same time. I always wanted to have more kids, I wanted them close together. I’m not doing that comeback again, because that was horrible.”

“I Just Wanted One More”

It’s extremely rare to see fighters retire on a win, and it’s usually the sting of defeat that encourages a struggling fighter to walk away from the sport. That was apparently never an issue for Nunes, who says that she had already been planning her retirement for over a year.

“After I fought Mackenzie [Dern] my next fight was gonna be my retirement fight. I was gonna fight Amanda Lemos. I ended up having kidney stones again going to 115. It just wasn’t healthy for me to go to 115. 125 I feel my best, and I just wanted one more, you know? Two careers at the highest level in the same household is really rough. And I do want to help the future and the next girls coming up, so that’s what I’m gonna focus my time on now.”

Nunes has certainly had ample opportunity to work with young fighters recently, as the 36-year-old helped out as a coach on Season 30 of The Ultimate Fighter. The head coaches for that season were Julianna Peña and Nina’s wife Amanda Nunes, who had lost her…

Peña Enjoyed Being “In Control” On TUF 30