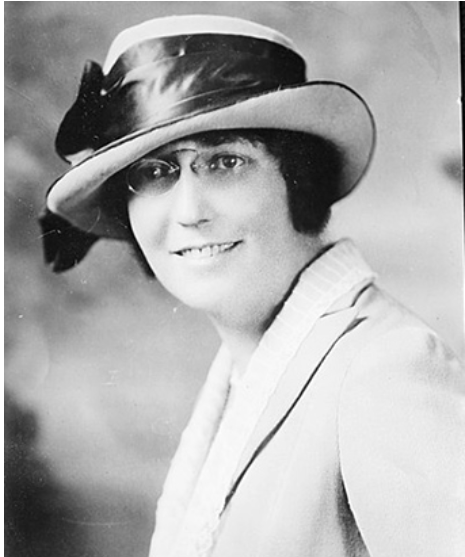 For Hispanic Heritage Month, we honor a Latina who dedicated her life to the advancement of Latinos and other disadvantaged groups: Nina Otero-Warren.

Otero-Warren is known for fighting for women’s suffrage in her home state of New Mexico, becoming the first female Superintendent of Public Schools in Santa Fe County, stimulating political change, and helping to improve public health.

Recently, Otero-Warren was the first Latina to be featured on US currency.

She was honored with her image being stamped on a US quarter, which also depicts New Mexico’s state flowers and Otero-Warren’s Spanish slogan, “Voto para la mujer,” – “votes for women.” Early Years of Life for Otero-Warren

Otero-Warren was born in 1881 in New Mexico on her family’s hacienda – large estate.

With Spanish roots, Otero-Warren attended school until age 13, when she returned home to help educate her siblings and work on the family ranch, according to the National Park Service.

Given her family’s wealth, Otero-Warren became part of the Santa Fe elite, described as “high spirited and independent.”

A Meaningful Career for Otero-Warren

Around 1910, after her short marriage and divorce from her first and only husband, Rawson D. Warren, Otero-Warren became active in New Mexico politics, particularly women’s suffrage.

Her suffrage work eventually caught the attention of Dr. Alice Paul, one of the most prominent activists of the 20th-century women’s rights movement.

Understanding the importance of Latina support in winning women’s suffrage, Paul asked Otero-Warren to head the New Mexico chapter of the Congressional Union (precursor to the National Woman’s Party), according to the National Park Service.

Otero-Warren was an excellent choice for this position, as she understood how to reach the widest audience possible. For example, Otero-Warren insisted that suffrage literature be published in both English and Spanish.

While continuing to work in politics, Otero-Warren’s passion for educating others remained strong.

Although she didn’t have to work because of her family’s wealth, she took a job in 1918 as Superintendent of Public Schools in Santa Fe County, where she worked to improve the conditions in rural Latino and Native American communities, according to the National Park Service.

As Superintendent, Otero-Warren fought discrimination against Native American and Latino students and the loss of their traditional language and customs in school. For example, she argued that both Spanish and English be allowed in schools, despite the federal mandate of English-only.

In the 1920s, Otero-Warren used her political talent to improve the health and wellbeing of her community. She served as the Chairman of New Mexico’s Board of Health; an executive board member of the American Red Cross; and director of an adult literacy program in New Mexico for the Works Projects Administration, according to the National Park Service.

A Life Well-Lived for Otero-Warren

After a fruitful career of social justice and public service, Otero-Warren settled down with her partner, Mamie Meadors, in the 1930s, and established a real estate and insurance company.

After Mamie passed, Otero-Warren continued running the business until her own death in 1965.

But before her passing, Warren left the gift of storytelling. She published several works, including the book, Old Spain in Our Southwest, which outlined her memories of the family hacienda.

While Otero-Warren was born into privilege, she took every opportunity to fight for disadvantaged groups. She lived a long life dedicated to serving and improving the lives of others.

More than 55 years after her passing, her legacy is still remembered and honored.

Want to Improve Communities for Latinos?

You can make a difference in your community, too.

Explore what health equity looks like in your area by Health Equity Report Card from Salud America! at UT Health San Antonio.

This report card has maps and data visualizations that shows inequities in local access to healthcare, food, education, and other social determinants of health.

You can use the data to write a grant or advocate for your neighbors. Share on social and present the Health Equity Report Card to your local leadership to spur system change!

Get your Health Equity Report Card!

INCOMING! 😂 a fart run of fate with perfect acoustics 💨 #shorts