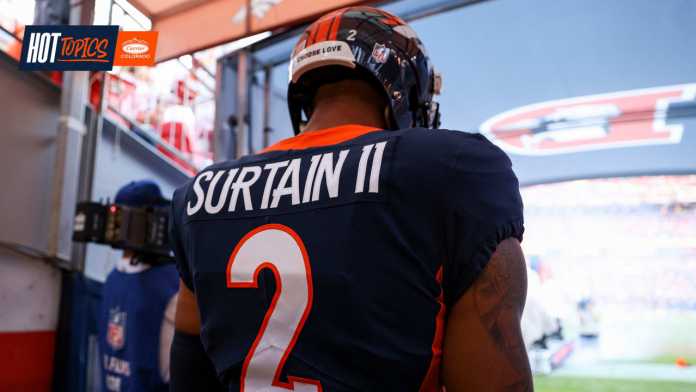 And on six occasions on Sunday night, the 49ers’ pass fell incomplete.

After a strong start to the season, Surtain took another step forward on “Sunday Night Football” as he didn’t allow a completion against the San Francisco 49ers.

When Garoppolo targeted other areas of the field, he completed 18-of-23 passes for 211 yards and a 78.3 completion percentage, according to Next Gen Stats. Against Surtain, though, the 49ers didn’t find any success.

And in the second half of Denver’s defensive performance, the 49ers essentially stopped trying to test the second-year player; Surtain was targeted just once after halftime.

“I probably wouldn’t throw his way, either,” Head Coach Nathaniel Hackett said Monday. “First and foremost, as a person, this guy’s special. I think that’s what makes him such a great player up to this point. He’s just going to continually get better. Just his natural athletic ability, his ability to not panic is huge. When you take this amazing athlete and then you take this guy who’s so humble and a guy that wants to be coached and wants to be great, I think that’s when you see him continually grow and get better.”

Surtain’s six targets without a reception are tied for the most without a catch since 2001, and he’s allowed the fourth-lowest passer rating in the league since he was drafted, according to Next Gen Stats.

The second-year player allowed an average of just 1.5 yards of separation between himself and the targeted wide receiver — which was less than half the distance that 49ers receivers had on targets in which Surtain was not targeted.

“It’s all about just confidence,” Surtain said Monday of his success. “Stepping in and making plays and doing what’s best for the defense. Coaches put me in the best position possible for me to have that game yesterday and play at the best of my abilities. It’s just all around goes to the preparation, your film study, your confidence going throughout the game.”

The 2021 ninth-overall pick’s talent was most evident when he broke up a pair of first-half passes for Brandon Aiyuk — including one that got the Broncos off the field on third down — but the advanced numbers perhaps better illustrate Surtain’s impact.

According to Pro Football Focus, Surtain has allowed just eight catches for 45 yards — an average of 5.6 yards per reception — while battling players like Seattle’s DK Metcalf, Houston’s Brandin Cooks and Aiyuk.

With a battle with Las Vegas’ Davante Adams on deck, Surtain said he’s embraced the challenge of facing an opponent’s top receiver. Adams, a two-time first-team All-Pro, may be the biggest challenge after recording a touchdown in each of the first three games.

“I embrace it a lot, going against premier receivers like that week in and week out,” Surtain said. “You just expect that, especially coming from our division. We’re facing top receivers each and every week. You’ve just got to come out and do what you’ve got to do. Going against a receiver like [Adams] — a top receiver — it comes down to film study, your preparation throughout the week, and you can only control what you can control going forward. It’s going to be a good battle, but looking forward to it.”

So long as Surtain continues to match his current level of play, he should hold his own against any receiver he faces.

The Broncos struggled at times on Sunday night, as the offense posted nine three-and-outs and did not reach the end zone until late in the fourth quarter.

But as Hackett explained Monday, Denver is still working to perfect its offense as quarterback Russell Wilson adapts to a new team and new system.

“I think, when you look at it … Russell’s been in one place for his whole career,” Hackett said. “And then he comes here, he’s got a new coaching staff, new city, new fans, new press, new system, new people that he’s going out there and playing with. So it’s not as easy as just going out there with anybody and playing ball. So I think we’re all working through all kinds of things. I’m working through things with him on making sure I’m calling the proper plays for him, that the players are running the right routes. … Just that whole thing. Just everybody working together.

Denver hasn’t been without offensive success, as the Broncos have scored fourth-quarter go-ahead touchdowns in each of the last two weeks. As Hackett, Wilson and Co. move forward, though, it’s clear there’s room to improve.