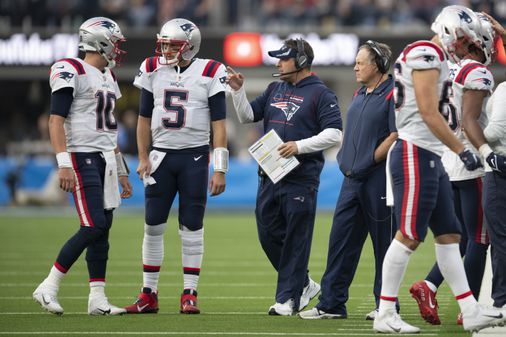 A common theme to Mac Jones’s press conferences is the quarterback emphasizing he needs to do better.

A quick audit through nine games, however, reveals a portrait of a rookie who just keeps doing that steadily. Through nine games, Jones leads all first-year signal-callers in completions (204) and passing yards (2,135). He’s on pace to throw for more than 4,000 yards – a feat accomplished by only three rookies: Andrew Luck (4,374), Justin Herbert (4,336), and Cam Newton (4,051).

Still, Jones has gone through some rough patches, but has had the support system in place to help him navigate his way through it.

“That’s obviously something you have to address, even in college or whatever, you have like a little dry spout of incompletions,’’ he said. “Just try to find a way to get back on track and do your job and it just comes back to taking a deep breath … and sticking to my rules.’’

He knows help is always at the ready.

“So, Josh [McDaniels] does a good job of explaining what I need to be looking at, and he always guides me in the right direction. [Brian] Hoyer does a good job of helping me, as well, so it’s great to have those guys just get me ready for the next series.’’

McDaniels has been impressed with the way Jones has handled the volume of information and responsibilities thrown at rookies and how he’s responded to the dip.

“I think Mac is working really hard to try and master and improve in all levels of quarterback play,’’ McDaniels said. “I think it’s important for us to keep in perspective that these are his first nine games in the NFL. We ask a lot of the quarterback position, mentally we ask a lot of the quarterback position after the ball’s snapped, and sometimes I see a lot of progress and things that don’t necessarily show up in the stat sheet. I feel like each day is an opportunity for him to grow and improve and I think it’s really important that we don’t measure … we’re really not worried about…