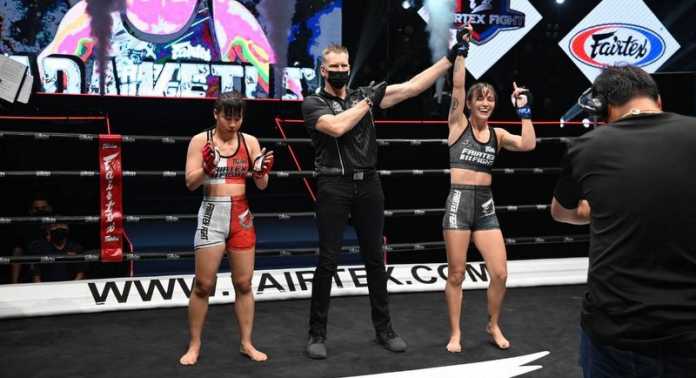 MMA: How long does it take to make history? For Phuket resident and fighter Jada Ketley, one minute was already too long.

In just 52 seconds, Ketley was able to submit Apidet Fairtex in the first-ever mixed combat sporting event at the venerated Lumpinee Stadium, one of the legendary homes of Muay Thai. Ketley was also part of the first women’s MMA fight at Lumpinee, a venue that has long shunned women from taking part in Muay Thai until this year.

“I don’t even have the words for it. I really feel like I get to make a small piece of history and carve a path for other up-and-coming women in MMA,” she told The Phuket News prior to the bout. “It’s such an honour. I believe the last couple of years of my life have been leading up to this moment. Just shows that if you work hard and stay committed and patient, your opportunity will come,” she added.

For many, the sight of watching fighters wrestle and go after submissions on the floor of the Lumpinee boxing ring was satisfying, given how much push-back there was against MMA in Thailand. For years, the authorities and promoters who controlled Muay Thai, and combat sports at large in Thailand, had demonized MMA. Peak anti-MMA sentiment in the Kingdom came in 2012, when the head of the Sports Authority of Thailand (SAT) banned professional MMA events in the country, since, according to him, the sport went against the 1999 boxing law.

At the time, the deputy governor of the SAT, Sakol Wannapong, commented that “[MMA] is brutal and it is not boxing.”

Fast-forward 10 years and the sport is not only allowed but is now hosted in one of the inner-sanctums of Muay Thai in Lumpinee Stadium.

The Fairtex Fight Promotion, an offshoot of the Fairtex fight brand and gym based in Pattaya, hosted their first bi-monthly combat sporting events that included a mix of Muay Thai and MMA…

Khamzat Chimaev vs. Gilbert Burns In The Works For UFC 273