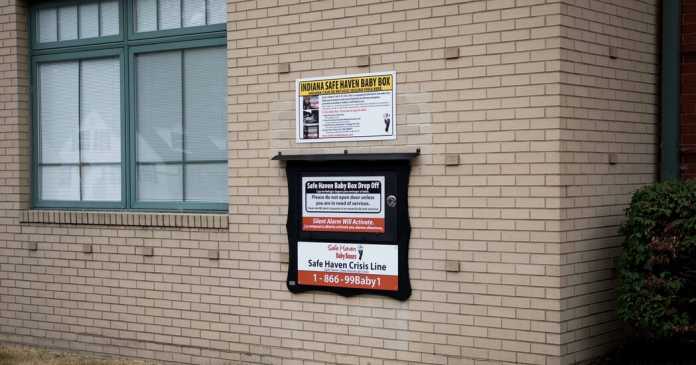 The Safe Haven Baby Box at a firehouse in Carmel, Ind., looked like a library book drop. It had been available for three years for anyone who wanted to surrender a baby anonymously.

No one had ever used it, though, until early April. When its alarm went off, Victor Andres, a firefighter, opened the box and found, to his disbelief, a newborn boy wrapped in towels.

The discovery made the local TV news, which praised the courage of the mother, calling it “a time for celebration.” Later that month, Mr. Andres pulled another newborn, a girl, from the box. In May, a third baby appeared. By summer, three more infants were left at baby box locations throughout the state.

The baby boxes are part of the safe haven movement, which has long been closely tied to anti-abortion activism. Safe havens offer desperate mothers a way to surrender their newborns anonymously for adoption, and, advocates say, avoid hurting, abandoning or even killing them. The havens can be boxes, which allow parents to avoid speaking to anyone or even being seen when surrendering their babies. More traditionally, the havens are locations such as hospitals and fire stations, where staff members are trained to accept a face-to-face handoff from a parent in crisis.

All 50 states have safe haven laws meant to protect surrendering mothers from criminal charges. The first, known as the “Baby Moses” law, was passed in Texas in 1999, after a number of women abandoned infants in trash cans or dumpsters. But what began as a way to prevent the most extreme cases of child abuse has become a broader phenomenon, supported especially among the religious right, which heavily promotes adoption as an alternative to abortion.

Over the past five years, more than 12 states have passed laws allowing baby boxes or expanding safe haven options in other ways. And safe haven surrenders, experts in reproductive health and child welfare say, are likely to become more common after the Supreme Court’s decision to overturn…

Serena Williams Announces Plans to Retire From Tennis: What We Learned