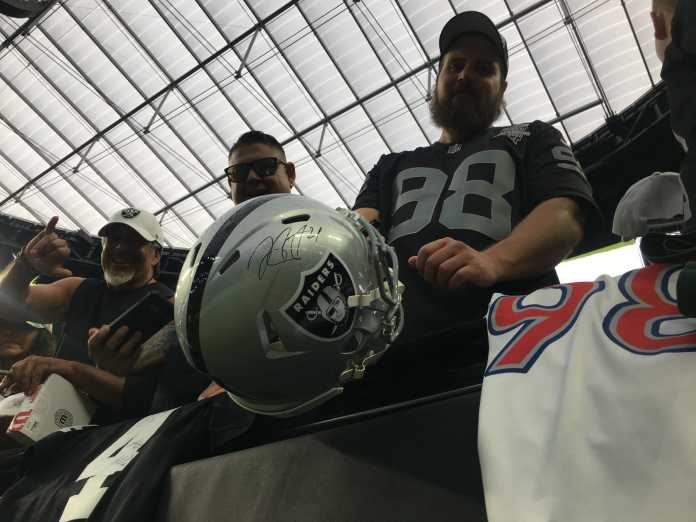 By Alan Snel of LVSportsBiz.com

They practiced against each other on fields in Henderson this week. Today, the Raiders and Patriots suited up in team uniforms and went at it inside Allegiant Stadium.

It gave the Raiders an unblemished 4-0 preseason record as Las Vegas preps for its season-opener in Los Angeles against the Chargers Sept. 11. The Raiders did not commit a turnover Friday, while recovering a fumble by the Patriots and also picking off two passes for a pair of interceptions.

Foe those curious about the stats for a preseason game, check these numbers out. The Raiders reported distributed tickets were 61,323.

The Raiders’ natural turf field looked rather worn for the first preseason game against the Vikings and the natural grass didn’t look much better today. The Raiders will be getting new turf for the regular season.

It was ridiculously hot in Las Vegas for the Raiders tailgaters in the stadium lots. My car thermometer said it was 100 degrees in the shade.

So we ducked inside the domed, air conditioned stadium at 1:30PM.

The national anthem was being practiced and TV workers were putting gear into place.

The game’s opponent for the Raiders — the New England Patriots — must stir emotions for McDaniels.

Raiders owner Mark Davis pays special attention to the Raiders alums and today some 300 former Raiders players were in the stadium.