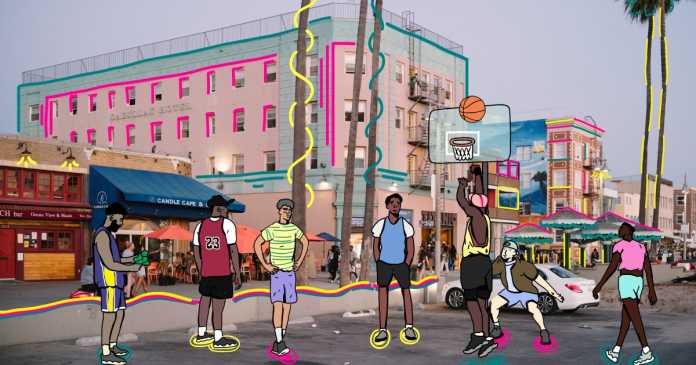 This story is part of Image issue 6, “Energy,” an exploration what sports style feels like in the City of Champions. See the full package here.

As legend has it on the courts of Venice Beach, Michael Jordan once got taken to the hole by a local construction consultant/roofer/father of one named Sidney Deane. Afterward, deep in his feelings but mesmerized by what just went down, Jordan looked at Deane, defeated, and suggested that he try out for Summer Pro League. “No!” Deane cut Jordan off. It was not that he didn’t have the skill or the athleticism to run. Deane worried about tainting the style of play that he had cultivated at various blacktops around town. Indeed, his jumper was structurally sound, not to mention pretty; his defense was nimble; his trash talk was cutting. “Might mess up my game,” he told Jordan in a biting staccato.

Only those who witnessed what transpired that day know what the so-called Greatest of All Time did next. But we do know Deane finished the run, dipped out and probably made a few quick stops on his way home to his wife and his baby and his Vista View apartment in the Jungle. Somewhere along the line, he told somebody the tale. Deane knew the power of the oral tradition well. Today, the story of what he did to MJ on the court lives on; every day, people remember his dance, his shimmy, his flourishes. How he talked, how he hustled, how he adjusted his shot based on the wind — his presence is felt.

Nearly 30 years ago, Ron Shelton told Sidney Deane’s story in “White Men Can’t Jump.” The film, now a cult classic, has received its share of critical acclaim for its beautiful rendering of a bromance between Deane (Wesley Snipes) and Billy Hoyle (Woody Harrelson). But what has always struck me is the way in which it masterfully uses a basketball court as a physical space where shared histories converge. The film reminds us there are stories to be found between the out-of-bounds lines, on the backboards, the 10 feet under the rim — everywhere on the court.

The drama in each basketball scene is informed by the narratives the players bring with them — their memories, experiences, bonds, what they woke up with that morning. On the Venice courts, where Deane and Hoyle meet, Deane gives you a peek into his past — from the aforementioned Michael Jordan tale to the source of his obvious affection for the people, like Junior (Kadeem Hardison), whom Deane hangs with at Sizzler in his spare time. In Watts, Deane can’t hustle Hoyle without his preexisting relationship with Robert (Cylk Cozart). When, on a court off Crenshaw, Hoyle loses his tournament winnings to Deane because he can’t execute a dunk, the emotional force comes from Hoyle’s history of gambling addiction.

What other narratives exist on the hallowed ground where Deane and Hoyle played? For this installment of Icon-ography, we tracked down the courts from the film, many of which are still spaces where people get good runs daily. We wondered how the legacy of Deane and Hoyle feels to the people of L.A. who use these spaces, and what it might look like to excavate this rich, textured, fictional world in the present. We brought in Micah Fluellen and Jacob Moscovitch to help us remember what “White Men Can’t Jump” gave us: a legend that Angelenos refuse to let die.

Ian F. Blair is the Editor in Chief of Image.

How Do You Make Teen Comedies Today? Buy a High School.