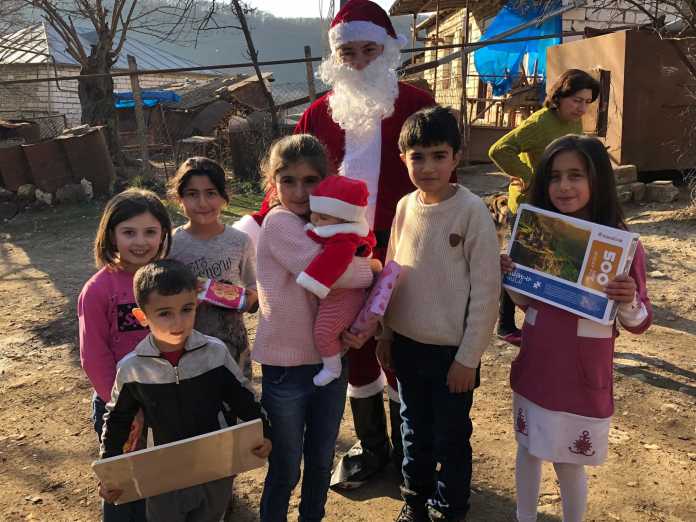 When Shant Charshafjian was handing out Christmas presents to the children of Martuni dressed as Santa Claus, I immediately began reminiscing about my childhood. After the first Artsakh war of 1988-1994, and every year since then, Christmas presents were sent to the children of Artsakh from different countries. This gesture was the biggest and happiest moment for those children who lived in the doom and gloom of the 90s. I still remember the gift boxes, pencils, warm gloves, and letters written in a foreign language that we could not read or translate, but still, there was so much love and warmth in them.

Charshafjian is a young American Armenian who moved from Los Angeles to Artsakh just before the start of the 2020 Artsakh War. During the war, he collected and distributed material resources to soldiers on the front lines. In its aftermath, he immediately implemented a number of programs for assisting the people of Artsakh and continues to do so to date through the Lorik Humanitarian Fund.

Through this program, more than 400 families of the victims of the Artsakh War were provided with chickens and feed. Charshafjian also set up greenhouses for the villagers and provided necessary equipment for local kindergartens and athletic programs. He has organized tours of the Puppet Theater of Shushi for the children in the border villages of Artsakh and Armenian dance lessons.

However, out of all these programs, the distribution of Christmas presents to the children of Artsakh has a special significance. Together with his wife Marine and newborn daughter Maral, they hand-delivered gifts to almost 4,000 young children in more than two dozen settlements of the Martuni region. Charshafjian is also an ethical person when it comes to choosing gifts as he mainly chose Armenian-made toys, educational…

The Dark Reality of Los Angeles

'Winning Time' shows authentic human side of Laker legends – The...

New Zealand just reopened to tourists. This is what it was...