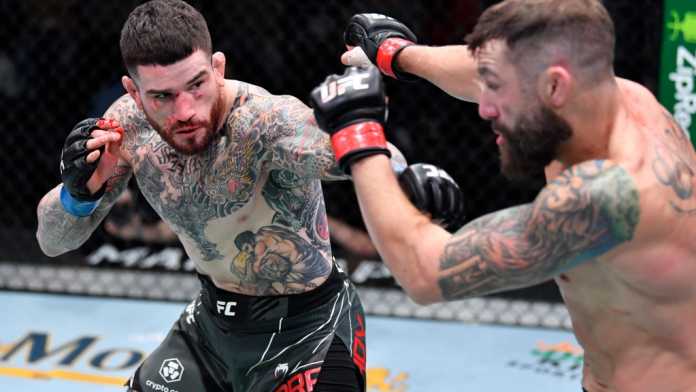 According to Sean Brady, the UFC is trying to rebook him against Belal Muhammad.

Brady (15-0 MMA, 5-0 UFC) was scheduled to face Muhammad in December 2020, but their bout was scrapped after Brady withdrew. Since then, Brady has picked up wins over Jake Matthews and Michael Chiesa.

Muhammad (21-3 MMA, 12-3 UFC), on the other hand, is coming off four consecutive wins, including back-to-back dominant performances against former title challenger Stephen Thompson and the streaking Vicente Luque.

“@bullyb170 I know the ufc is calling. pick up the

and agree to the fight. Nowhere to run now. I am coming for you.”

Muhammad, who recently entered the UFC’s top five welterweight rankings, has been eyeing fights with the likes of Khamzat Chimaev and Colby Covington and isn’t keen on fighting backwards.

“Lol didn’t u pull out of our first flight clown who’s running ..: it’s funny u got twitter fingers now but went silent when @handzofsteelmma was calling ..there’s 4 guys above me without a fight I’m tryin to fight.”

Brady also has expressed interest in fighting Thompson, but if he can’t get “Wonderboy” or Muhammad next, he has two other names in mind: fan favorites Jorge Masvidal and Nick Diaz.

“@WonderboyMMA, @ufc told you to fight me. You flat out said, “no,” because you are scared. U can’t stay in the rankings refusing to fight ranked fighter. Step up let’s go!”

Jarred Brooks Showers Next Opponent With Compliments Ahead Of January 28...

Dan Hardy Reveals How Long He Intends To Compete After Combat...