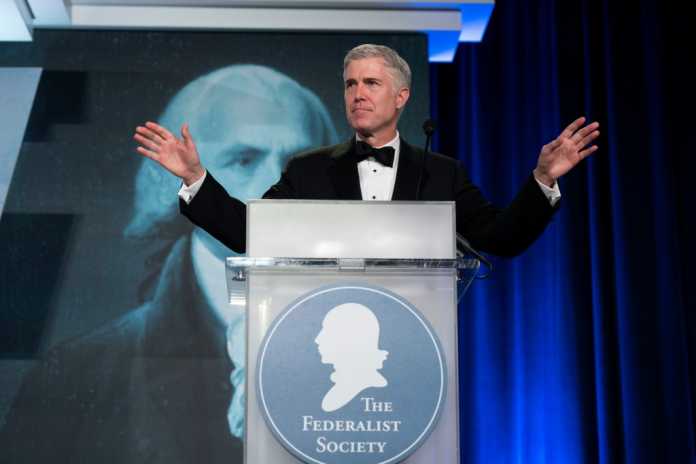 How important is impartiality in the U.S. court system, and how badly will America suffer now that the Supreme Court has shattered trust by stripping individual liberties from pregnant women based on religious and political — not biological — views of female reproduction with no deference to judicial restraint or decades of court precedent?

Let’s look at Justice Neil Gorsuch’s ruling on religious freedom, the First Amendment, and a taxpayer-paid football coach praying with players on the 50-yard line after each game.

Gorsuch wrote in the majority opinion in Kennedy vs. Bremerton School District that the Washington school district violated football coach Joseph Kennedy’s First Amendment rights by firing him for refusing to stop praying in the middle of the school’s football field after the games.

“A government entity sought to punish an individual for engaging in a personal religious observance, based on a mistaken view that it has a duty to suppress religious observances even as it allows comparable secular speech. The Constitution neither mandates nor tolerates that kind of discrimination. Mr. Kennedy is entitled to summary judgment on his religious exercise and free speech claims,” Gorsuch wrote in an opinion released Monday.

So far, so good. We are privileged to live in a country where the government cannot restrict our free speech or our religious practices without clearing a huge legal hurdle proving restrictions are justified and narrowly tailored.

But we are also privileged to live in a country where the government and by extension its employees are barred from using their positions of power to proselytize under the establishment clause. The logic behind this is simple: The government cannot restrict an individual’s religion without just cause, but nor can it create an environment whereby others are forced or coerced to participate in a religious activity that might violate their own religious beliefs (imagine a devout Jewish or Muslim student being forced to say a prayer invoking Jesus Christ as their savior or a Christian student who was told to do salah along with a Muslim teacher).

There is a clear push and pull of rights here, and where a judge should place the final weight on the scale is no easy task. With more than 200 years of rulings behind the institution, most cases that the court accepts for consideration these days are at the most painful point of hair-splitting.

The American people must have the utmost confidence that Gorsuch and his colleagues on the Supreme Court are weighing merely the Constitution, court precedent, and the facts of the case at hand. I do not know how the court recovers from having determined — irrespective of the law in question in Dobbs vs. Jackson Women’s Health — that a fertilized egg (known as a zygote) represents a compelling reason to strip pregnant women of their constitutional right to privacy. The religious implications of such a ruling when the question at hand was a ban on abortions at 15 weeks are undeniable.

Now where once I would have given a man like Gorsuch the benefit of the doubt, all I can see is his personal bias in a ruling that otherwise would be defensible. And I am not alone. Outrage at Gorsuch’s ruling quickly circulated online as folks accused the justice of lying in the majority opinion when he described Kennedy, in multiple places, as having “offered his prayers quietly while his students were otherwise occupied.”

Gorsuch did not lie in his ruling – the evidence in the case supports that Kennedy eventually started praying without his team, but that students from the rival team and members of the community joined him. It strikes me as odd, Gorsuch’s emphasis that the prayer was quiet — did he whisper or just use a normal voice instead of projecting, could only those closest to him hear, or could the entire group hear?

When the school district first asked Kennedy to stop praying with the team, he was not quiet and was not alone. The evidence presented in the case supports that the prayers were often said before the game and after the game, had overt religious themes and all the players listened. The practice is common across America for coaches to draw inspiration from their religion in pregame and postgame talks. It’s usually not a problem until it is, and it would be smart for a district to enact a policy to get out ahead of likely complaints.

In 2015, a Jewish teacher at Florence High School filed suit against the Fremont County school district because a church led a morning prayer before school around a flagpole and held bible study in the cafeteria at lunchtime. In a single day there were five religious events, some announced over the intercom and religious fliers were distributed on campus. After the teacher complained, he was transferred to an elementary school. Eventually, the district resolved the case out of court agreeing to stop the religious activities on campus, realizing that such activities were clearly indefensible in a public school.

Gorsuch is right that a narrowly tailored restriction by the school would have been to allow Kennedy or anyone else working in the district to kneel in quiet prayer as their faith directed, but the facts in the case make it also reasonable for the school district to tell Kennedy that because his prayer had become ingrained in the practices of the institution, he must stop the public display so others did not feel pressure to still participate. Kennedy was asked not to pray in the middle of the field.

If your high school football coach is in a public fight with the school district over prayer, the pressure to support him would be immense.

I agree wholeheartedly that school districts cannot restrict employees from “any demonstrative conduct of a religious nature.” Such a rule would clearly violate the employee’s First Amendment rights.

But ask yourselves this: If Gorsuch had instead been presented a case where a Muslim coach followed the religious teachings of Islam requiring him to pray five times a day facing Mecca, and when those prayers occurred during practices or games many if not all of the students joined him in the most prominent place possible, would Gorsuch have decided to put his weight on the same side of the scale? Would Gorsuch have protected the job of that coach if he had refused to take his prayer away from the students so they would no longer feel pressured to join?

That time is gone. Now I suspect Gorsuch might have found the temptation to side with the Christian Church in Fremont County too tempting had the case reached his bench, requiring instead that the Jewish teacher be the one to leave if he had a problem with the church on campus.

I don’t know where America goes from here.

Megan Schrader is the editor of The Denver Post’s opinion pages.

To send a letter to the editor about this article, submit online or check out our guidelines for how to submit by email or mail.