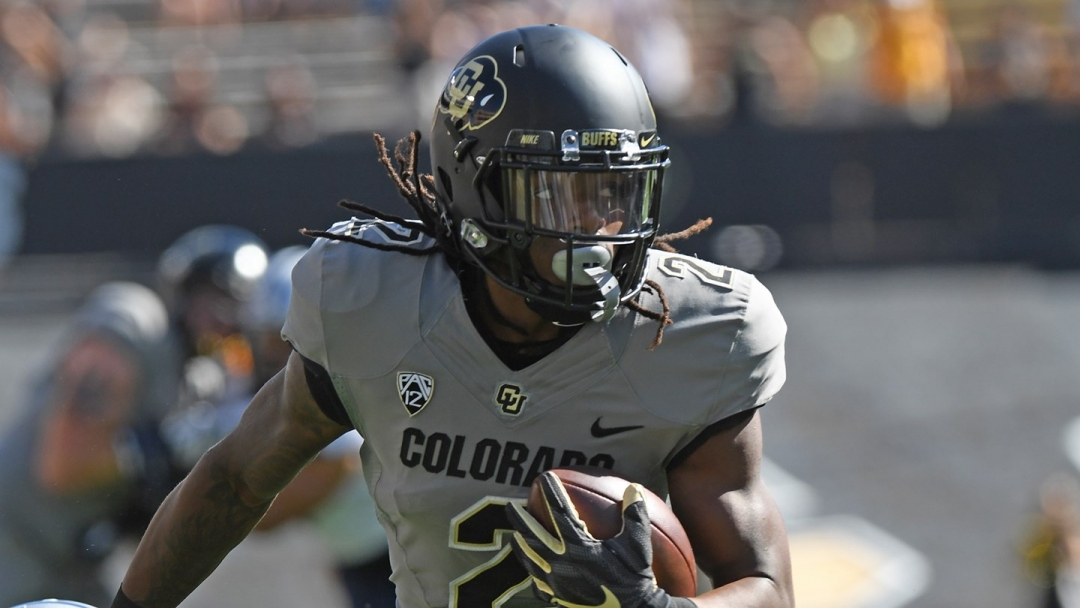 Shenault is the third receiver this decade to win the honor, named for the late Zack Jordan, joining Paul Richardson in 2013 and Nelson Spruce in both 2014 and 2015.  However, he’s the first player to earn the honor as a sophomore since 1999 when inside linebacker Jashon Sykes was recognized, and just the fifth sophomore to ever be named CU’s MVP, joining Joe Romig (who shared it in 1959), tailback Eric Bieniemy (1988) and quarterback Darian Hagan (1989).

He was on a record pace until he suffered a turf toe injury in the second half at Southern California and would miss the remainder of that game and the next three games.  He still finished the year with 86 receptions for 1,011 yards and six touchdowns, with an additional 115 rushing yards and five scores (he was the only player in the nation to score at least five times both rushing and receiving).
The first-team All-Pac-12 performer by the league coaches recorded the 10th 1,000-yard receiving season by a Buff, as he zoomed up CU’s all-time receiving charts over the course of the year.  He went from not being ranked to 20th in career receptions and to 21st in career yards as he had the third-most single season catches and the ninth-most yards.  He had five 100-yard games, tied for fourth-most, and his 11 touchdowns averaged 27.5 yards per (his six TD catches averaged 41.2 per).  Overall, he earned 50 first downs (43 receiving), gaining 634 yards after the catch and 346 after contact.

Shenault also garnered second-team honors from the Associated Press and was a unanimous first-team Midseason All-American prior to going down with the toe injury.

The John Mack Award for the most outstanding player on offense was given to graduate transfer Travon McMillian.  He arrived at CU in the summer after graduating from Virginia Tech and rushed for 1,009 yards and seven touchdowns while averaging 5.0 yards per carry.  It was the 17th time a Buff has rushed for at least 1,000 yards in a season, and McMillian was the 14th different player to accomplish the feat.  He had five plays from scrimmage of 49 yards or longer (four rushes, one reception), caught 14 passes for 118 yards and one touchdown and earned 47 first downs (43 rushing).

CU had a 1,000-yard rusher and receiver in the same season for the first time in its history with Shenault and McMillian both topping the plateau.

The Dave Jones Award for the outstanding defensive player was shared by two sophomores, defensive end Mustafa Johnson and inside linebacker Nate Landman.

Johnson, who earned AP first-team All-Pac-12 honors, led the team in both quarterback sacks with eight-and-a-half, tackles for loss with 18 and quarterback hurries (16); he had 73 tackles (53 solo), fourth-most on the team, with 10 third down stops while playing 673 snaps from scrimmage.  He had 10 tackles on two occasions (at Nebraska and versus Arizona State), which included two multi-sack games (two against Nebraska and Oregon State).

Landman led the Buffaloes in tackles with 123 (61 solo), as he was in for 619 defensive plays.  He led the team in tackles behind or at the line of scrimmage with 25, which included a team-high 12 stops for zero gains.  He also led the team in interceptions (two), tied for third with 10 third down stops, and added five passes broken up, three hurries, two forced fumbles and a recovery.  He had 10 or more tackles in seven games, including 14 in his first start (against Colorado State in the opener) and a career-high 19 against Utah.

The Bill McCartney Award for special teams achievement was won by senior safety Daniel Talley.  Playing on several special team units over his career, he finished fourth in special team points this past fall with 21: he was in on six tackles (two inside-the-20), nine knockdown blocks on returns, two forced fair catches, a downed punt and a caused penalty.  He was third in points as a junior (18) and had 44 for his career, which included 14 tackles (11 solo).

Senior defensive tackle Mo Bandi claimed the Dean Jacob Van Ek Award for academic achievement.  Bandi is on schedule to graduate in May with a degree in Neuroscience, MCDB (Molecular, Cellular and Developmental Biology) and Pre-Med Studies; he is also minoring in Biochemistry.  He owned a cumulative grade point average of 3.6 through last summer’s semester.

The Scout Team Awards recipients were freshman quarterback Blake Stenstrom for offense and redshirt frosh defensive end Nick Edridgefor defense.  The coaches selected the players who contributed the most to the weekly preparation on their respective scout teams over the course of the entire season.

The Lee Willard Award for the most outstanding freshman went to defensive end Israel Antwine, who started 11 of 12 games at left defensive end and played 457 total snaps, the most ever by a true freshman defensive lineman for the Buffs (and the seventh by any true frosh at any position).  He had 16 tackles (nine solo, three for losses including a quarterback sack), nine hurries, two third down stops and two tackles for zero gains.

Junior quarterback Steven Montez earned the “Best Interview” honor from CU’s beat media, for his attending every weekly press luncheon to being available postgame, whether the Buffaloes won or lost.  He’s just the fourth quarterback to win the award since its inception in 1987, as he joins Kordell Stewart (1994), Mike Moschetti (1999) and Sefo Liufau (2015).

In all, a record 88 players earned letters this season, including 21 seniors and 47 who were cited as first-year lettermen, another school best; 29 of those players were freshmen (19 redshirt, 10 true).  The lettermen broke down into 41 offensive and 40 defensive players along with seven specialists.

Mel Tucker, who was named CU’s 26th full-time head coach just last Wednesday, spoke briefly after the awards were finished.  His themes was that everyone in the room was  part of the CU family, including those he never coached, has yet to coach, or recruited.

Registration is now live for the largest virtual business event of...

ABOUT US
HispanicBusinessTV.com is a platform that promotes Latino culture and lifestyle, through interesting, unique and diverse content for all kinds of audiences. It offers news, business, technology, sports, entertainment or any other trending topic that today’s tech-savvy audience is after Read More >>
Contact us: info@hispanicbusinesstv.com
FOLLOW US
© 2019 HispanicBusinessTV.Com All Rights Reserved, A WooWho Network Property.
MORE STORIES