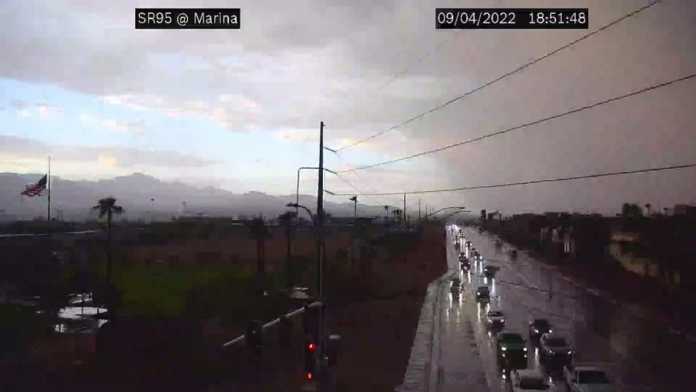 About 8,000 residents in the Bullhead City area remained without power on Monday afternoon after a “massive” wind storm struck the area on Sunday evening, according to Mohave Electric Cooperative.

Officials in the northwestern Arizona city said a storm packing wind gusts of 60 mph hit around 6:30 p.m. Sunday. In a news release Mohave Electric Cooperative reported there were microbursts of up to 80 mph.

There were no reported injuries, but Mohave Electric Cooperative said the pole damage left about 36,000 customers in the dark.

Bullhead City was responding to reports of water outages in several neighborhoods related to the power outage, the City said around 2 p.m. on Monday. Residents were asked to conserve water until power is fully restored.

Several traffic lights were also reported not working as of Monday morning, according to the Bullhead City Police Department.

They said it could take until Monday night to repair all of the damaged power distribution poles that run along a transmission provider line that also was knocked down and have electricity fully restored.

The power outage in Bullhead City, Fort Mojave Mesa and Mohave Valley could last through Monday night to several days, according to the Mohave County Emergency Management

“Extreme heat conditions today and the following days will pose potentially serious health problems for some residents, especially the elderly and those with existing health issues, who are without working air conditioning or fans,” Mohave County said in a news release on Monday.

Cooling stations with ice and water for residents affected by the power outage in near triple-digit heat have been set up at the Lake Havasu City Police Department, Sunrise Elementary School in Bullhead City, the Mohave Valley Fire Station and the Fort Mohave Mesa Fire Station in Mohave Valley.

Bullhead City is located directly across the Colorado River from Laughlin, Nevada and is 97 miles south of Las Vegas.

The Associated Press contributed to this article.