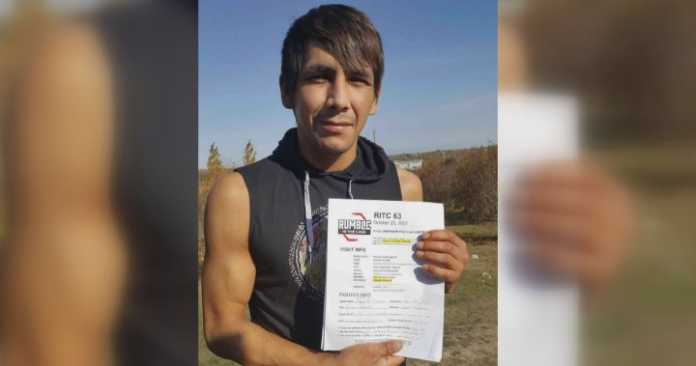 Caleb Ermine has his boxing gloves ready after signing the contract to fight in the Battlefield Fight League (BFL). The 33-year-old from the Sturgeon Lake First Nation has been in training mode to prepare to fight against a national wrestling champion, Ozhan Yalcin.

“I just want to … show my skills the best way I can against this very tough opponent,” said the mixed martial artist, who will be making his professional fighting debut. “He’s a very tough guy, his wrestling is high level. I got to be on my toes with this guy.”

Ermine travels from his reserve to train at North Wake Martial Arts in Prince Albert a few times a week and also travels out twice a week to Saskatoon to train at Alliance Martial Arts to amp up his wrestling skills.

He has been boxing for the past 10 years and got his start competing after he won in a Prince Albert boxing competition called R U TUFF ENUFF in 2008.

But the inspiration goes deeper than that. Ermine learned that his late grandfather, senator Hilliard Ermine, who served in the Second World War, boxed in the army.

“My grandma would talk about it and I started asking questions about him,” he said. “It made me proud.”

In return, Ermine hopes to make his late grandpa proud when he combats his opponent in a few weeks. It’s a challenge that he can’t wait to take up.

“Apparently on (Yalcin)’s YouTube channel, he’s saying he doesn’t respect me as a fighter,” Ermine said. “But I think a few punches to the face will change that thinking.”

Whether he wins or not, Ermine said it’s about testing his skills on a big stage.

“If I perform well, I’m going to keep on going,” he said.

The BFL will be broadcast on the UFC Fight Pass on Dec. 3.

Sean Strickland goes at Colby Covington for running his mouth