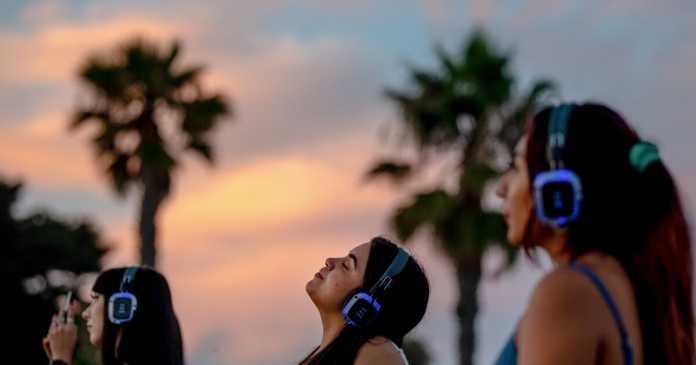 As the sun begins to set on an unusually hot and crowded Labor Day weekend at Junipero Beach, bemused onlookers amass around a curious sight.

About two dozen strangers stand in an awkward half-hearted circle on the sand, avoiding eye contact as they fidget with identical wireless headphones. But the self-consciousness of being an oddity on public display disappears as those headphones go over their ears, silencing the sounds of the rowdy beach. Children screaming at the nearby playground, teens catcalling, a heated family argument — all of it is drowned out by the dulcet tones of a song called “Akal” by White Sun.

A 25-year-old woman with a microphone speaks softly over the music, asking if it’s anyone’s first silent disco. Most in the eclectic group — which spans a wide range of ages, races, ethnicities, sexual orientations and gender identities — raise their hands.

The So We Are Silent Disco has met every Sunday in Long Beach since launching in March — almost two years to the day after Los Angeles County first implemented its Safer at Home COVID-19 order and changed the way we could socialize in public together.

It begins with a simple mirroring exercise, each willing participant contributing a dance move that the rest of the circle mimics. Some freeze under the pressure of creativity, only repeating a variation on what the last dancer did. It doesn’t matter though because no one’s keeping score.

However sheepish this hodge-podge crew seemed before, everyone spends the next hour quietly panting as their limbs flail in uncoordinated dance to music only they can hear. When a remix of Nina Simone’s “Feeling Good” plays, Katie Neary, the event organizer and guide, asks how each participant’s body dances when it “feels good,” even if it’s only possible to feel 1% better.

It’s so infectious that one intrigued onlooker makes a big show of joining in without headphones. After a pair is handed to him, he bows out quickly, appearing taken aback by the unfettered intimacy. A few chaotic children take his place. They stick around until the end, despite landing neither the rhythm nor the vibe of a single song.

Many of the silent disco first-timers leave in tears after being invited to speak on their experience, choking out furtive words of gratitude for something they can’t quite describe.

A returning participant braves sharing first by congratulating everyone for transforming from strangers into a community in just one hour. A preteen struggles to keep her voice steady; her uncertainty about the weirdness of a silent disco has washed away with the waves. Life can be a lot sometimes, she says, but somehow her mom still finds a way to create beautiful memories like this one for their family no matter how hard it gets. A soft-spoken young woman reveals she’s been stuck in a depressive episode and almost forgot that it was possible to feel this much, or this good.

Back in 2020, So We Are founder Neary was fresh out of college and making good money as a commercial insurance broker. “I thought that’s what I wanted my life to look like,” says the Cypress resident. “Then the pandemic happened, and everything stopped.”

That pause inspired a shift in priorities, away from corporate success and toward more personally fulfilling interests. She discovered ecstatic dance, a popular spiritual practice in L.A. that uses rhythmic movement to achieve meditative or trance-like states. From there she gravitated to a Venice Beach-based silent disco called the Wave, which borrows from dance movement therapy. Principles of this creative arts therapy range from the embodiment of positive feelings to working through trauma stored in the body. That resonated with Neary, who struggled with disordered eating and rare chronic illnesses affecting her digestive system that hospitalized her throughout her senior year of high school.

“My body continues to be my biggest lesson. Even though I healed, it’s the train that never stops,” she says. When she was younger, Neary tried to hide her illnesses to avoid being pigeonholed as the sick girl. “But the more you hide from something or try to pretend it’s not there, the more your body will just combust on you. I didn’t even realize how much I was running from myself until pretty much 2020, when I could finally look back.”

So Neary took the Wave’s five-week facilitator training course and set her sights on bringing a healing-focused silent disco closer to home. She is, however, careful to not misrepresent herself as a dance movement therapist. Every silent disco begins with a reminder that participants can opt out at any time, especially if any intense emotions arise.

After finally quitting her corporate job this year, she teamed up with brother Michael Neary (who holds the title of chief vibe officer at So We Are Silent Disco). They struck algorithmic gold by going semi-viral on TikTok in July, causing attendance rates to jump from about 10 to 15 to 20 to 40 people every Sunday, with tickets priced at $30.

But TikTok’s For You Page isn’t the only way people find their way to the So We Are Silent Disco.

Back in April, 30-year-old Jordan Alexandra Lynn found themselves feeling lost after leaving the evangelical church and moving to Long Beach from Orange County in search of more queer-friendly communities. While walking down Junipero Beach, they asked the universe for a metaphorical sign in the right direction. Then there was the literal sign for So We Are on the beach, with rainbow flags proudly planted in the sand below (Neary is also queer). Like many attendees, the typically reserved Lynn was at first startled by what they signed up for. But the exercise in public vulnerability proved more fun and approachable than most other exercises in healing.

“The last couple of years have been incredibly rough for me. But here I am, feeling, in this body. In front of all these people,” Lynn says.

For Neary, the public setting only heightens the bond within the group, especially for those with social anxiety, since “we’re all in it together. You’re not doing anything alone. If you jump, we jump.” Also, for folks who continue to be wary of large gatherings due to COVID, “it’s a way to get out and reconnect, be in community — but still feel safe.”

In contrast to the newbies, 58-year-old Lorraine Aguilar is exactly the kind of hippie type you’d expect to have been waiting for a silent disco to make its way to Long Beach. “Honestly, this is what’s gonna save us as a planet. I know that’s a big statement,” says the CEO of Working Harmony, a company that teaches corporate empathy training. “You can respond to uncertainty by navigating from a place of fear, anger, depression, reactivity — or we can fill ourselves with love, joy, creativity, freedom from judgment. … So it’s a lot more than just dancing.”

To sneering skeptics, the wholehearted sincerity of So We Are Silent Disco may look like little more than an embarrassing public display of cringe. But Neary welcomes the label, asserting that “the more you embrace your cringe, the more freedom you’ll have. Cringe is just judgment you’re holding against your own self.”

In many ways, the silent disco can serve as an informal exposure therapy of sorts as we enter yet another phase of the pandemic. To the chronically jaded, it injects a sense of hope directly into your veins. To the socially anxious introvert, the reliance on nonverbal communication acts as an equalizer. To those who cannot shake the certainty that we are still safer at home, you can be in community with the public while remaining 6 feet apart.

For now, that might need to be enough. We spent so much time “together alone” that maybe dancing alone together on a beach is all we can handle.