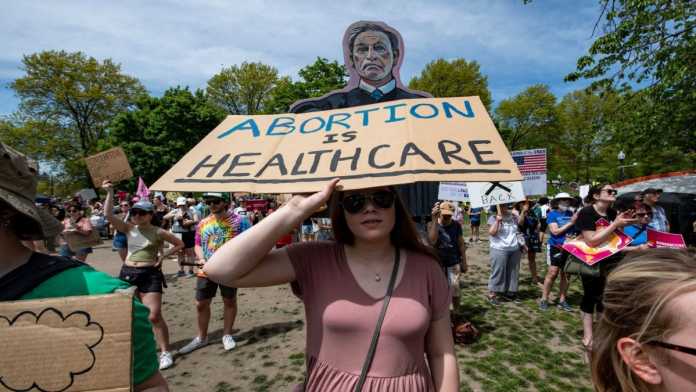 People will gather over abortion rights Monday in Swampscott, the latest in a wave of demonstrations in Massachusetts and across the country since the U.S. Supreme Court voted to overturn Roe v. Wade Friday.

People on both sides of the issue continue to gather to have their voices heard in Massachusetts — where a woman’s right to an abortion is still legal. The advocates join a growing call on social media for people all across the country to be part of a national strike in support of abortion and privacy rights.

In Swampscott, the community planned to gather at the World War II memorial starting at 10 a.m. Monday as part of the movement. The all-day demonstration is being organized by a local activist and mother.

On the first full day without federal abortion rights in the United States in 50 years, hundreds of pro choice demonstrators gathered outside the Massachusetts State House, protesting the Supreme Court’s ruling.

Several local leaders were invited to attend the event, which will take place in the hometown of Massachusetts Gov. Charlie Baker. The Republican governor signed an executive order Friday protecting access to reproductive health care services in the state.

Organizers are asking women in every sector to take any time they can on Monday to be part of a general strike in opposition to Friday’s Supreme Court ruling.

Cam Newton Wants You to Eat This Vegan Chicken