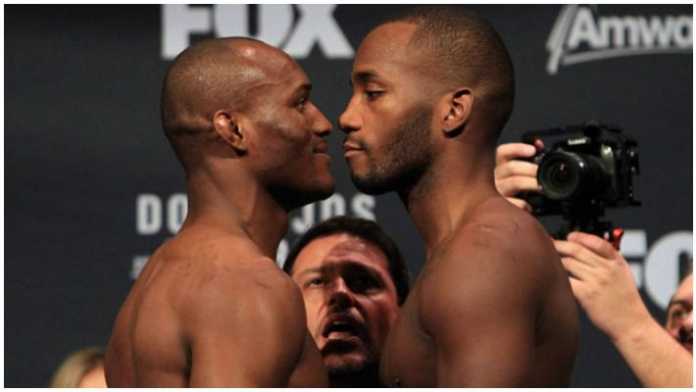 One week from today, the MMA community will be able to watch for themselves the evolution of Kamaru Usman and Leon Edwards.

On December 19, 2015, a young Kamaru Usman and Leon Edwards competed in the Amway Center in Orlando, Florida. Seven years later, the two men will be headlining a summer pay-per-view event.

These two welterweights share one thing in common. Since that night, neither of them has lost a single fight. Usman has gone 13-0, with wins over the likes of Colby Covington (x2), Jorge Masvidal (x2), and Gilbert Burns among so many others.

As for Edwards, he has topped names like Rafael dos Anjos, Gunnar Nelson, Vicente Luque, and Nate Diaz during his 10-fight unbeaten streak.

Earlier this week, the UFC posted the full 2015 fight between Usman and Edwards, which you can view below. You can also watch Usman’s journey to becoming a UFC champion right here for a more intimate glimpse at the champion’s evolution.

And back when Leon Edwards’ win streak was at eight, the UFC put together this video to celebrate “Rocky’s” evolution during his own pursuit of UFC gold.

Next week, you can watch Usman vs. Edwards 2 live at UFC 278. But for now, this unique preview of the main event will have to do.

How much do you think Kamaru Usman and Leon Edwards have grown since this fight? And will UFC 278 have a different outcome?

Why did Tommy Fury pull out of the Jake Paul fight?