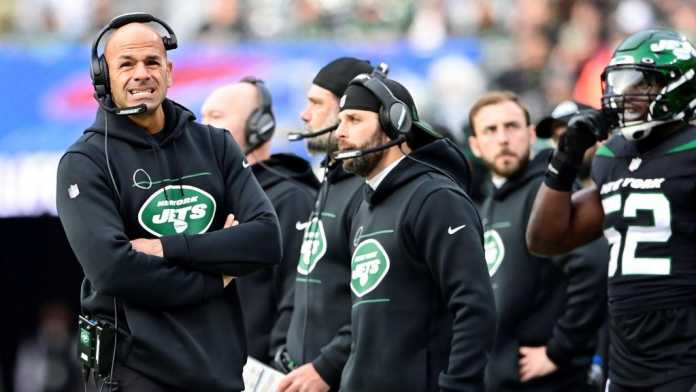 C.J. Mosley said after Sunday’s loss to the Eagles that NFL teams don’t respect the Jets, accusing Philly defensive tackle Fletcher Cox of laughing at Gang Green on the sidelines.

But after giving up 400 yards (sixth time in last nine games) and 30 points (fifth in last seven) yet again, it’s hard to respect Gang Green. Their defense is a disgrace.

In the final five games of the season, it’s Robert Saleh’s responsibility to show a glimpse of his defensive prowess that propelled him to the CEO of the franchise.  And he knows it’s on him and his coaching staff to correct this issue.

“I do look at coaches to get this fixed,” Saleh said candidly.

Mosley added that Cox didn’t shake hands with the Jets captain during the coin toss, which irked Mosley. (Cox responded with a photo of Instagram on him hugging Mosley at the coin toss, writing “Respect the game.. one thing fletch will always do!!!!!”)

But Mosley also admitted the Jets have to earn the respect. Robert Saleh agreed with his star linebacker on Monday.

The Jets defense is the root of the lack of respect.

After starting the season well, they’ve fallen off a cliff and haven’t earned the regard of their peers.

“We have to change the narrative by our play,” captain Folorunso Fatukasi added. “Our level of play has to rise and continue to strive to do better. So it’s really just the bottom line.”

Right now the unit is allowing 30 points per game and almost 400 yards per game, both dead last. At one point they were a top-10 defense scoring unit after three weeks, holding offenses to 22 points per game.

The fall started after Week 5.

Since then, the Jets have 14 sacks, seventh fewest in the NFL and the sixth fewest pressure rate at 23%.

Quarterbacks have feasted, posting most passing touchdowns (19), the highest passer rating (116), completion percentage (71), and the second most yards at 2,491. On the ground, the Jets have allowed 1,092 yards, fifth most and 15 touchdowns, tied for the most.

The list of opposing offenses that had great days against the Jets since Week 5 is longer than a George Washington Bridge traffic jam during rush hour.

High-powered and struggling offenses alike have cooked against this defense.

The Colts ran for 260 yards and their running backs ran for seven yards per carry before contact.

Who can forget when the Falcons offense was averaging 319 yards per game coming into the London matchup then put up 450 yards of total offense — without Calvin Ridley.

Saleh’s defense is the cure for whatever ails the AFC East.

The Patriots were 26th in the NFL in total offense with a rookie quarterback before they played the Jets in Week 7. Then they tore Gang Green into pieces to the tune of 551 yards and 54 points.

And that was with the Jets coming off their bye.

The Bills hung 45 points on Gang Green — a week after netting nine points against those defensive juggernauts in Jacksonville.

They accomplished all three against the Jets. Tua Tagovailoa hit Mack Hollins down the field for a 65-yard touchdown pass, they rushed for 115 and Tagovailoa was sacked zero times. And the Dolphins’ unit totaled 388 yards, their third highest mark of the season for a doormat that’s 28th in total offense.

Bright spots like the Texans game, when they held Houston under 300 yards, have been few and far between.

Yes, the unit is short on talent, with injuries to vital players like Marcus Maye, Carl Lawson, Lamarcus Joyner and Bryce Huff.

But the Jets don’t think their defensive woes are acceptable regardless of circumstance. Fans shouldn’t excuse the worst defense in the NFL either.

“Will we keep working? Absolutely we will,” Ulbrich said. “Hopefully we can get some incremental gains these next five games, starting with this one against New Orleans, and get better results, and try to build some momentum going into this offseason.”

Saleh and Ulbrich have to figure out a strategy to make their defense look respectable as the year ends.

Because enough is enough.

Nurse pleads people to get vaccinated as hospital admissions go up