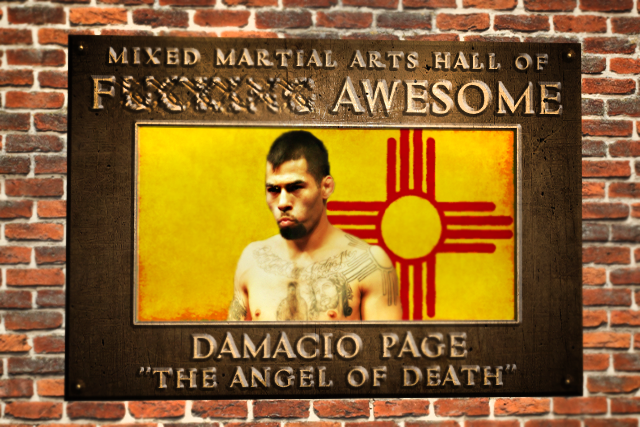 Headquartered in scenic Woodloch, Texas, the Mixed Martial Arts
Hall of [email protected]#$%&g Awesome (HOFA for short) commemorates the
achievements of those fighters who, while they might not be
first-ballot selections for a traditional hall of fame, nonetheless
did remarkable things in the cage or ring, and deserve to be
remembered. The HOFA enshrines pioneers, one-trick ponies and
charming oddballs, and celebrates them in all their imperfect
glory. While the HOFA selection committee’s criteria are mysterious
and ever-evolving, the final test is whether the members can say,
unanimously and with enthusiasm, “____________ was [email protected]#$%&g
awesome!”

We remember it all: the relentless aggression on the feet as well
as on the ground; the nuclear right hand; and, of course, a
pre-fight scowl hostile enough to make the sponsor decals start
peeling off of the cage floor. Dear Lord, that glare. For
those who were there for Page’s scorched-earth heyday, as he made
his way through World Extreme Cagefighting, the Ultimate Fighting Championship and Legacy Fighting Championship, the name
instantly brings images to mind. Violent images. “The Angel of
Death” and his 95-percent career finishing rate were an integral
part of why the Zuffa-era WEC was so beloved by hardcore fans — and
an early rebuttal to the idea that smaller fighters lacked stopping
power.

Like many smaller fighters who came up in the mid-00s, Page
ventured far outside his ideal weight range in search of fights
early in his career, fighting at featherweight and even
lightweight. His 154-pound matchup with fellow HOFA inductee and noted openweight giant
slayer Genki Sudo at
K-1 Premium Dynamite 2006 might have been the only time in Sudo’s
career that he enjoyed a visible size advantage. Nonetheless,
despite giving up height and weight to most of his opponents, Page
put together a 12-3 record with 10 first-round finishes,…