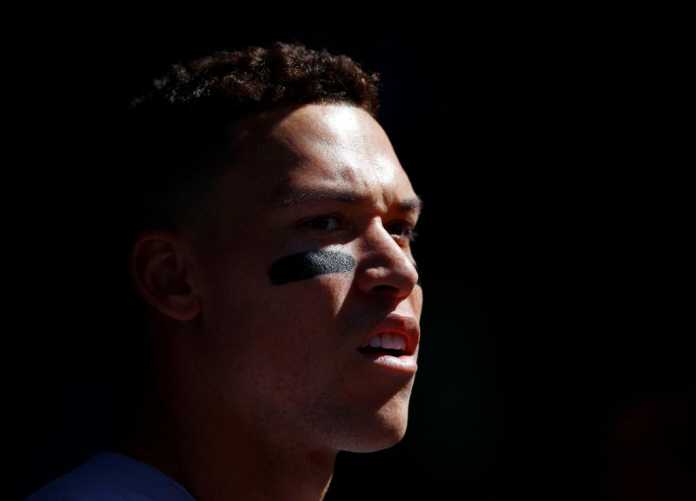 TORONTO — The Yankees head into the Tampa Bay area this week with perhaps their biggest challenge ahead of them. Sure, they are coming in with the best record in baseball and a huge lead in the American League East. And just last week they swept the Rays back in the Bronx. Their pitchers have allowed the fewest runs in the majors and their hitters have hammered the most home runs.

But this week could define not only this season, but the franchise’s next decade.

Wednesday, before the team heads back to the Bronx to face the Astros, is the scheduled time for the arbitration on Aaron Judge’s 2022 salary. The process has never been described as a positive, relationship-building experience by players who went through it — just ask Dellin Betances. It’s a process that Judge, whose historic home run pace this season is not supposed to be taken into consideration, remembers from when the Yankees beat Betances and the hard feelings that grew in the clubhouse.

With the Yankees looking like a World Series contender, they shouldn’t let any more hard feelings enter into their relationship with Judge.

The best case scenario is that they can find common ground on a deal for this season or long-term that keeps them out of the room — like they did at the last minute with Luis Severino in the spring of 2019.

To be fair, the Yankees did attempt to avoid this.

The sides talked all spring, but less than two hours before the start of the Yankees’ 2022 season, GM Brian Cashman announced that the team had failed to reach an agreement with the face of the franchise. Judge turned down a deal that would have paid him at least $230.5 million over the next eight years, which puts him in line to become a free agent at the end of this season.

The slugger, who initially set the Opening Day deadline for negotiations, still doesn’t have any set contract for this season, because he and the team were $4 million off when they traded numbers to try and avoid arbitration. Because of the owners’ lockout, the arbitration process will go into the season.

The 30-year-old Judge was coming off one of his most complete years in the big leagues.

“Obviously our intent is to have Aaron Judge stay as a New York Yankee as we move forward and I know that is his intent as well, which is a good thing,” Yankees GM Brian Cashman said after the negotiations failed. “Obviously we’re going to be entering those efforts in a new arena, which would be at the end of the season when free agency starts and maybe that’ll determine what his real market value would be because we certainly couldn’t agree at this stage on a contract extension.”

Cashman also made public the terms they had offered Judge, something that the slugger said “disappointed” him.

The average annual value of $30.5 million would have made him the highest paid position player per year in Yankee history and the second highest on the team behind Gerrit Cole. It would have given him the second-highest AAV of an outfielder in the game, behind only Mike Trout.

The $4 million seemed like a small gap in salary for the face of the franchise, especially now. Judge is on pace to hit a franchise record 63 home runs. He leads the majors with 25 home runs and is second in slugging percentage at .654. He’s fifth in RBI with 50.

Obviously those numbers are not supposed to be considered when deciding this year’s salary by the arbiter, but they should by the Yankees. Judge is the leader on this team and in the clubhouse. The Yankees are on a path to the playoffs and looking like a contender to end the franchise’s World Series drought. They need to leave Tampa Wednesday night with their slugger happy and their team chemistry intact.

Eligibility of half-million Coloradans on Medicaid to be reviewed when pandemic...

Lowe’s is opening Petco shops inside some of its stores